No one thought we would be celebrating Christmas in the midst of a pandemic, yet here we are. This year, things are a little different: We’re pulling our lens back to examine our year and shine the spotlight on little things over the next 12 days– both material and immaterial that one can either gift or savour now or in the next year. To kick things off, here’s Bell & Ross’s BR 03-92, a bold watch that’s captured our resident watch expert’s attention. Because alpine holidays will just be a matter of time.

Winter might still be on the horizon but Bell & Ross has already prepared us all for potential sub-zero warfare — or the ski slope.

Drawing on its strong military know-how, the BR 03-92 White Camo continues the brand’s penchant for creating tools for the urban adventurer with the combative print, this time rendered in white.

This follows black and green variants of the past, but deviates from conventionality seeing as how white camouflage is so unusual in watches. This might give it a less military and more streetwear feel, but the idea of military stealth is still very much at the heart of this timepiece, and it’s easily the most striking watch in the collection so far. 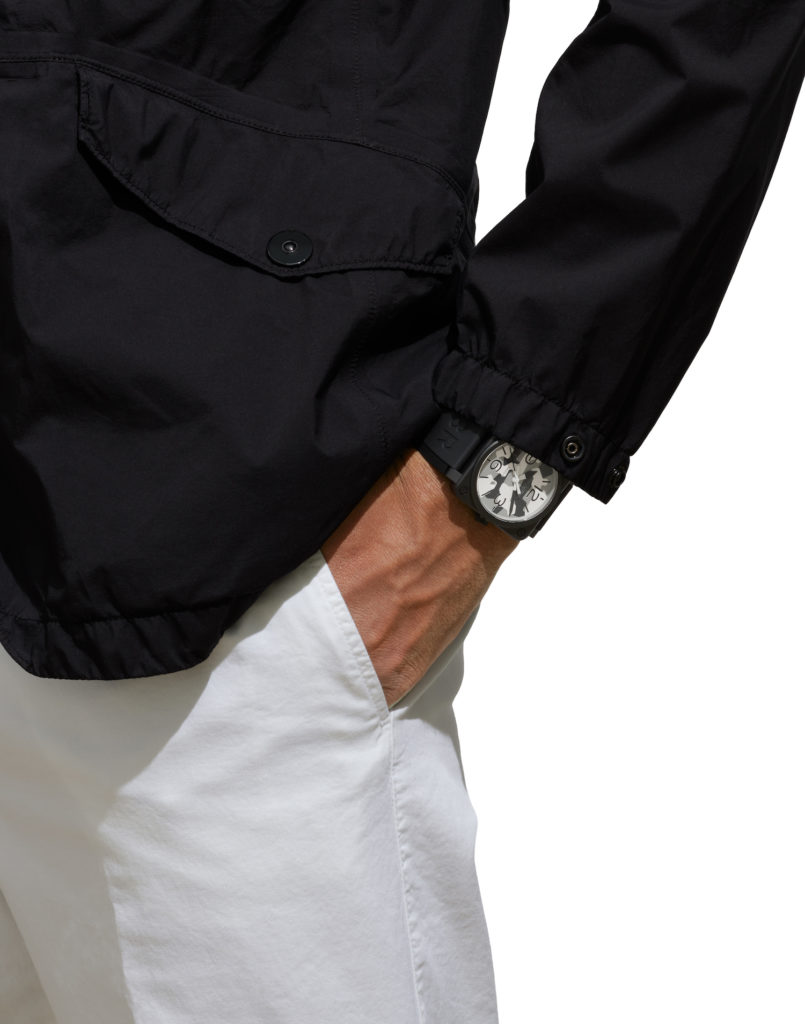 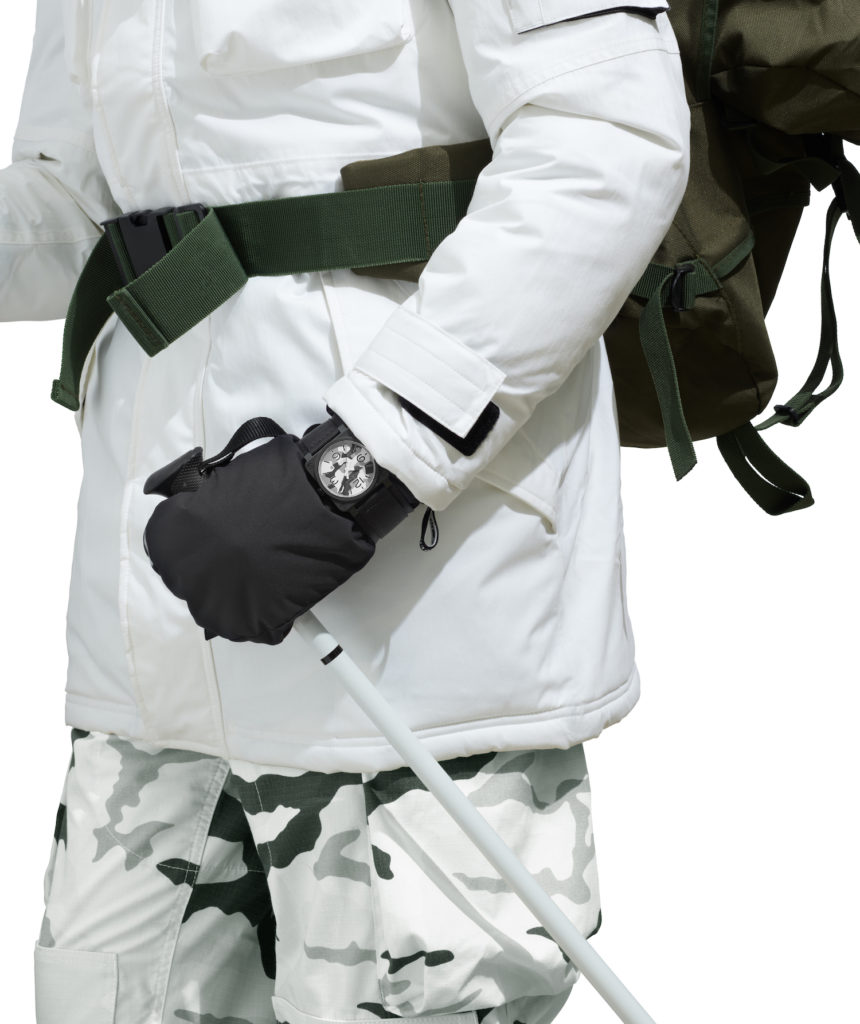 The tri-coloured camouflage of white, dark grey, and light grey here finds its way onto the dial and strap. The case, however, is rendered in a matte black to highlight the brand’s “circle within a square” trademark look, with four functional screws on each side to secure the case and bolster the idea of functionality and robustness. Within the 42mm x 42mm ceramic case is the brand’s typical sandwich construction, which you’ll get a glimpse of via the cut-out numerals and markers that reveal a lower plate with black Super-Luminova. 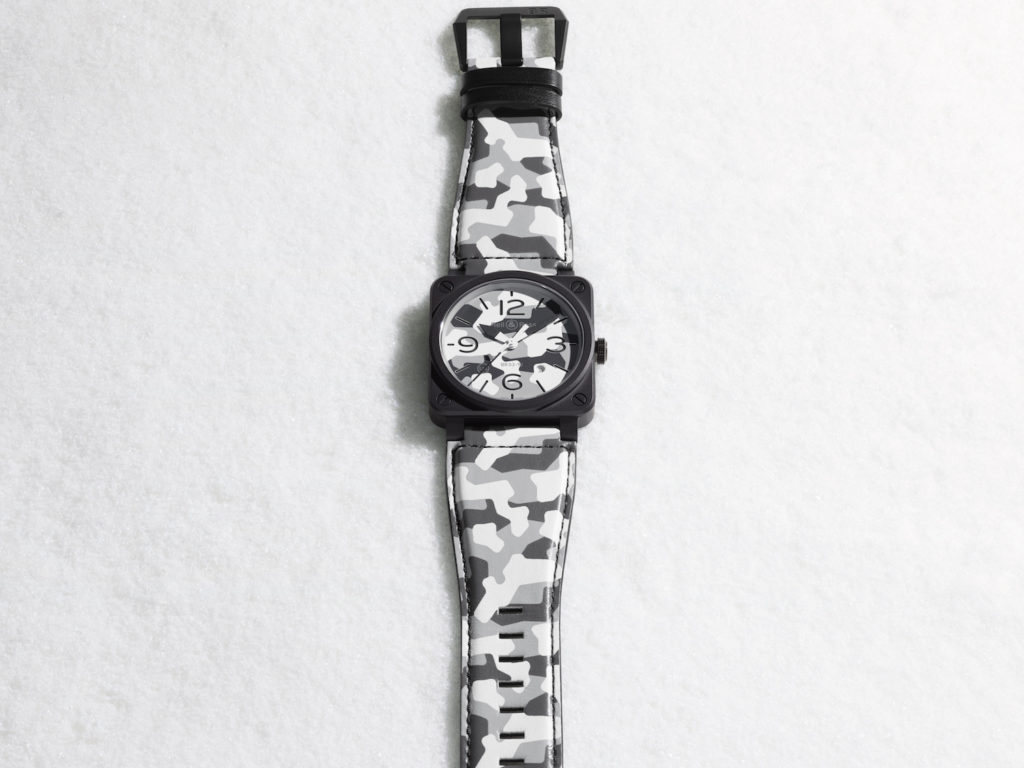 These details are joined by black pilot-style luminescent hands and an “LTD” mention at 7.30 as a reference to old military watches — a reminder that while extremely trendy, this watch was still made with the alpine forces in mind. These elite units operate covertly in the highlands and snow-capped peaks overlooking the French Alps and require their equipment to be as efficient as they are undetectable against a sea of white.

This is undoubtedly a bold watch, but should you want a more discreet look there’s an additional black rubber strap included. Inside, the Sellita SW300 runs the show, a Swiss self-winding mechanical movement that powers the hour, minutes, seconds, and date with a 42-hour power reserve. The bad news? Only 999 pieces of Bell & Ross’ latest will be made, making it one you’ll want to make a reservation for. After all, a little reminder of the wintry slopes is always welcomed at a time like this.