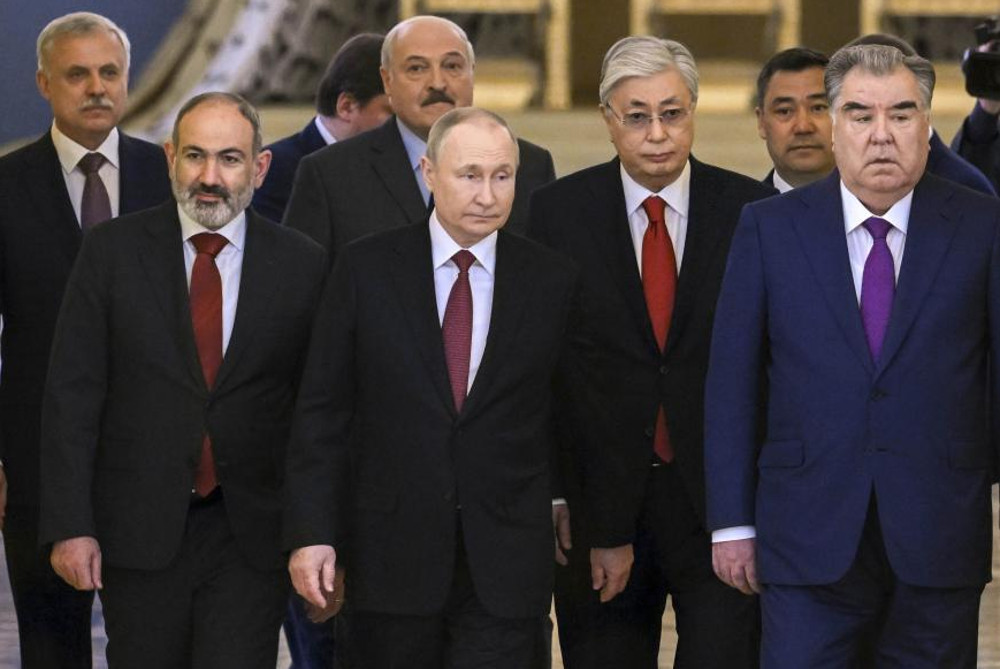 There should be no surprise that the summit meeting of the leaders of the Collective Security Treaty Organisation (CSTO) hosted by Russia at the Kremlin on May 16 fell short of articulating against the “collective West” over the Ukraine conflict. The same pattern as in the 2008 Russo-Georgian war is repeating. Russia is not dictating policies and is going along with the consensus opinion. The contrast with the US-led North Atlantic Treaty Organisation couldn’t be sharper.

The president of Belarus Alexander Lukashenko said at the summit in Moscow, “It is absolutely clear that without united pushback from the CSTO allies and other integration associations in the post-Soviet space, the collective West will ratchet up its pressure.” But President Vladimir Putin was the only other speaker to echo what Lukashenko said. Putin dilated on the NATO’s expansion strategy and its implications. But the remarks by the CSTO leaders from Central Asia — Kazakhstan, Kyrgyzstan and Tajikistan — and Armenia show that they weren’t impressed. None of them even referred publicly to the Ukraine war as a topic of urgent concern for the CSTO.

Without doubt, Washington has taken careful note. The Biden Administration singled out Kazakhstan as a special invitee to the ministerial meeting on global food security at the UN Headquarters in New York on May 18. Secretary of State Antony Blinken invited Foreign Minister Mukhtar Tileuberdi to Washington for a bilateral on May 20.

The US has always prioritised Kazakhstan as a key partner in the Central Asian region. In retrospect, the uprising in January in Kazakhstan made no difference to Washington’s assessment. President Kassym-Jomart Tokayev’s consolidation of power in Astana — ironically, with the help of CSTO forces led by Russia — seems to work splendidly for the US.

As Washington sees it, President Tokayev, formerly a career diplomat himself, has potential to transform Kazakhstan as a “swing state.” Thus, it estimates that Europe and the US can help the Kazakhs break free from the ties of history and move toward a freer, more independent future, which is bound to have a domino effect on the Central Asian region as a whole in due course.

In his welcoming remarks at the meeting with Tileuberdi at the state  department on Friday, Blinken said all the right things and came straight to the point — “Russia’s war of aggression against Ukraine,” which would have “profound impacts” in Central Asia in the areas of food, energy, trade, etc. The readout of the meeting said Blinken “confirmed our commitment to minimising the impact on allies and partners, including Kazakhstan, from the sanctions imposed on Russia.”

This assurance virtually rules out secondary sanctions and will come as a matter of great relief to Kazakhstan. In fact, the primary outlet for Kazakh fossil fuels has been a pipeline to the Russian Black Sea port of Novorossiysk. Although Kazakhstan has the world’s twelfth-largest proven oil reserves and is fourteenth for gas, profiting from those resources has proven difficult because it is landlocked, making it cumbersome to bring the fuel to market and difficult to transport exploration and extraction infrastructure to the sites in the first place. Also, Russian irredentism has the potential to disrupt Kazakh energy export routes. (Three years back, Russia forced an end to Kazakh oil and coal shipments to Ukraine, which transit Russian territory by rail.)

Paradoxically, Kazakhstan’s liberator comes from Beijing. Kazakhstan now supplies oil to China via pipeline and there is a parallel gas line that transits Turkmen exports through Kazakh territory. Whereas the conventional wisdom was that a China-Central Asia pipeline connection would be prohibitive cost-wise due to the vast distances involved, China has made the strategic investments along with Kazakh oil company KazMunaiGas, and the result is that the China National Petroleum Corporation has become Central Asia’s main energy player, overtaking Russia’s Gazprom.

The geopolitical implications of Kazakhstan’s multi-vector policies are self-evident. Unsurprisingly, the Western majors have invested heavily in Kazakh oilfields too. Suffice to say, Washington senses that Kazakhstan’s current transition from the rule of former President Nurusultan Nazarbayev will likely fortify its independent foreign policy for years to come.

While Washington’s engagement of the Central Asian region used to be episodic in the past, in a marked departure, the Biden Administration has shown the determination to pay sustained attention. This coincides with the sharp deterioration of US-Russia relations during the past year. The state department readout on Friday stated pointedly that “Secretary Blinken and Foreign Minister Tileuberdi plan to stay in close contact.”

The CSTO summit in Moscow last Monday, timed to coincide with the 30th  anniversary of the Collective Security Treaty and the 20th anniversary of the organisation, conveys a powerful signal that the allies of Russia and Belarus are taking a neutral stance vis-a-vis the war in Ukraine. They are neither supportive of Moscow nor opposed to it.

However, this is not to be construed as a reflection of the character of the Russia-Kazakhstan strategic partnership. Putin has long known and worked with Tokayev, who before becoming president in 2019 served as chair of the Senate with earlier stints as prime minister and foreign minister. That said, looking back, Russia had its own compelling reasons to help Tokayev overcome the January uprising in Kazakhstan. To be sure, the presence of the CSTO troops was a game changer for Tokayev who was able to consolidate his grip on power and stabilise the situation, which in turn re-established his own position as president.

However, as a result of it, Tokayev does not owe any “debt” to Moscow and indeed there has been no major shift in Kazakhstan’s internal or external politics in Russia’s favour, either. Five months later, we can clearly see that Kazakhstan does not support the war in Ukraine.

Kazakhstan has ruled out any diplomatic recognition of the two breakaway republics in Donbass region. But Kazakhstan has also so far consistently abstained from international votes, such as those in the United Nations, voting neither for nor against measures directed at Russia. Nonetheless, on the other hand, Kazakhstan also maintains that it will follow the principles and norms of the UN when it comes to the Ukrainian conflict. It is a delicate trapeze act which Tokayev skilfully handles.

The outcome of the CSTO meeting has come as a disappointment to Chinese experts who expected the leaders who gathered in Moscow “to deliver a consistent message to the West which has been sowing discord between Moscow and other CSTO members,” as a commentary in Global Times put it.

The commentary noted: “Chinese analysts said Monday’s summit was of great significance to Russia and the bloc amid the Ukraine crisis and multiple emerging internal challenges on security and economy… On the Russia-Ukraine conflict, the Central Asian countries did not fully support Russia or criticize Russia like Western countries.”