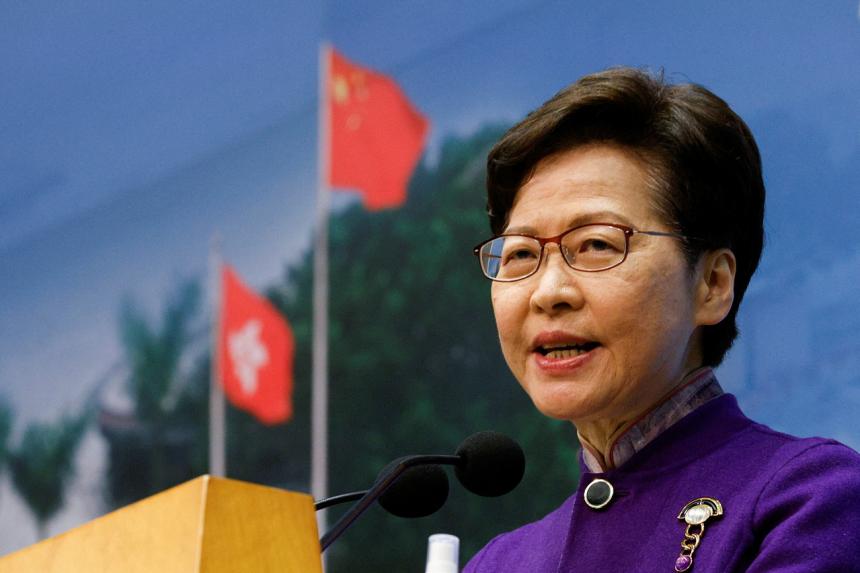 The most controversial and divisive chief executive since Hong Kong’s 1997 handover by Britain to China, Mrs Lam announced on Monday (April 4) she would not seek a second term.

A career bureaucrat, she became Hong Kong’s first woman leader in 2017 after being chosen by the small pro-Beijing committee that fills the position.

“My priority will be to heal the divide,” she said in her victory speech, acknowledging the rising calls from Hong Kongers for democracy and frustration over how their city was being run.

She also vowed to resign if she ever lost “mainstream opinion”.

Five years on she leaves office with record-low approval ratings, and the city’s 7.4 million residents have even less of a say in who leads them.

She began her career in the colonial civil service and headed the social welfare department after the handover, earning a reputation for being a workaholic.

During her predecessor’s tenure, which saw student-led democracy protests in 2014, Mrs Lam was the government’s number-two leader.

The first two years of her own term in office were comparatively calm. But Hong Kong exploded in 2019 when Lam tried to fast-track a bill that would have enabled extraditions to mainland China’s party-controlled courts.

A huge backlash snowballed into months of massive, and at times violent, democracy protests.

Midway through the unrest Mrs Lam was recorded privately telling a group of business figures that she had caused “unforgivable havoc”.

But she also said her hands were tied because she “served two masters”: Hong Kongers and Beijing.

“She could have decisively reversed, retreated or revoked. Yet she missed the chance and when she decided to give up, it was too late,” senior Beijing adviser Lau Siu Kai told AFP in January.

“None of Hong Kong’s chief executives had high popularity but none of her predecessors faced anything as politically dangerous as she did,” he added.

The protests were stamped out when Beijing imposed a national security law that criminalised much dissent.

China also introduced “patriots only” election rules which meant anyone standing for office must be vetted for their political loyalty.

Around 170 activists, opposition politicians, academics and journalists have been arrested under the security law.

Scores of civil society groups and government-critical local news outlets have been shuttered.

Critics, including many Western powers, say the shift tore up Beijing’s “one country, two systems” promise that Hong Kong could maintain key freedoms.

Mrs Lam, who once studied in the United States under the Fulbright scholarship programme, found herself sanctioned by Washington and joked she had to keep cash at home as a result.

“In the past four years, except for fulfilling Beijing’s demands, Lam failed to win Hong Kong people’s recognition in her other works,” veteran commentator Johnny Lau told AFP in a recent interview.

“Many policies rolled out by her government – even some that really benefit the general public – are resented and rejected.”

The last two years of Mrs Lam’s time in office were marked by a coronavirus pandemic response that left Hong Kong both internationally cut off and suffering one of the highest death rates in the world.

In lockstep with China, the city maintained some of the world’s toughest pandemic restrictions.

But the zero-Covid strategy collapsed when the highly transmissible Omicron variant broke through in December 2021.

The vast majority of the nearly 8,000 deaths were elderly people who were not vaccinated, despite Hong Kong obtaining ample supplies.

As she announced her retirement on Monday, Mrs Lam said it was “not the right time” to evaluate her legacy.

Back in December, she admitted she had not succeeded in uniting Hong Kongers, but argued the imposition of stability was something to be proud of.

“My greatest consolation is that Hong Kong has finally moved past the winds and waves,” she said.