BOSS x Russell Athletic recently teased their upcoming collaboration, which sees the two brands dive into their archives for an off-court-inspired collection.

While the meeting of tailoring and sportswear seems like a relatively new evolution on the style landscape, in fact, the two worlds have been playing a part in each other’s stories for longer than you think. 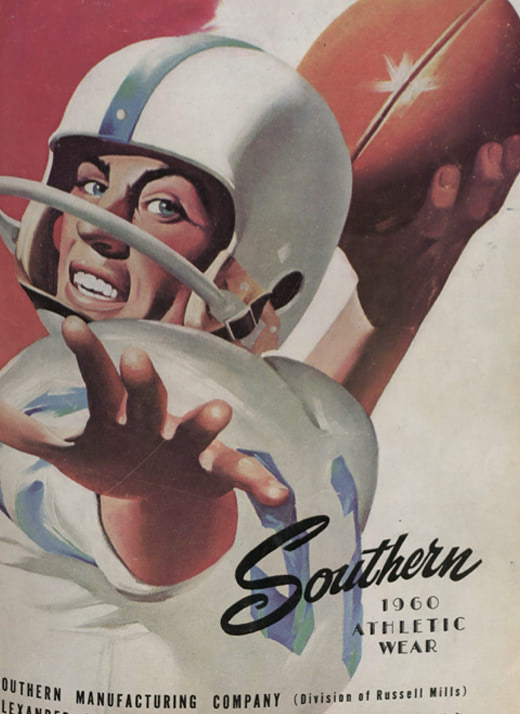 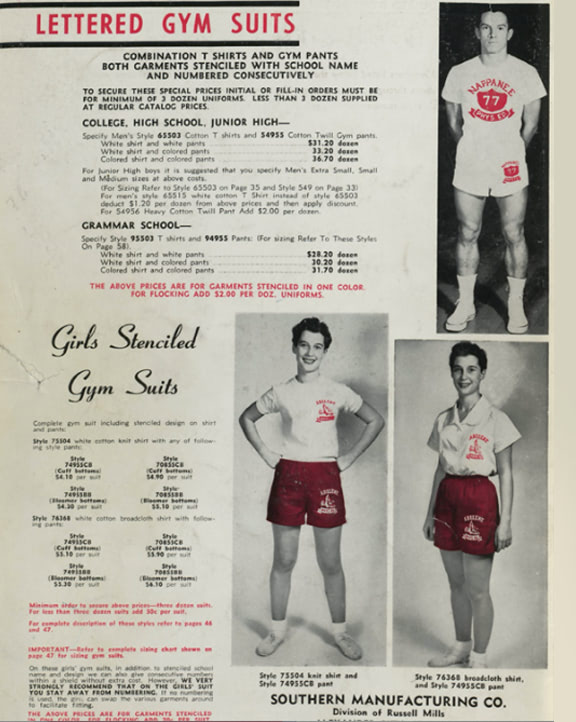 At the beginning of the 20th century, field and court sports were generally played in adaptations of one’s daily outfit. Any organized version of sport was only available to the elite at the UK’s universities and U.S. Ivy League schools. Then, sporting uniforms consisted of loose-fitting tailored pants, woolen undergarments for sports such as basketball and American football, and button-down polo shirts (also known as the Oxford shirt). At the same time, wool suit jackets, knitted jumpers, and cardigans were the off-court items of choice to throw over their uniforms.

When Benjamin Russell decided to create a more comfortable and performance-related garment for his son’s university teams, he changed sportswear forever.

Many of our smarter wardrobe staples were invented to accompany sports. The polo-collar shirt was first created with buttons on the collar to prevent it from hitting you in the face as you rode your horse while playing polo, and the polo coat was designed to be worn between rounds to keep the players warm. During the first half of the century, this mixture of tailoring and sportswear hadn’t yet managed to breach the walls surrounding the pitches and courts.

In 1926, Russell Athletic designed the first-ever sweatshirt. When Benjamin Russell decided to create a more comfortable and performance-related garment for his son’s university teams, he changed sportswear forever. Russell Athletic first supplied the sweatshirt to American Football teams and the army before other companies started to take Russell’s lead and create uniforms out of jersey, cotton, and synthetic mixed fabrics for all manner of sports.

By the late ’60s, America was in full swing, and those privileged enough would be able to live out their teens on campuses. At these universities and colleges, leisure and recreation took off. Outside of the classroom, sport was king, and the gear associated with sports started to blend into student’s day-to-day attire. 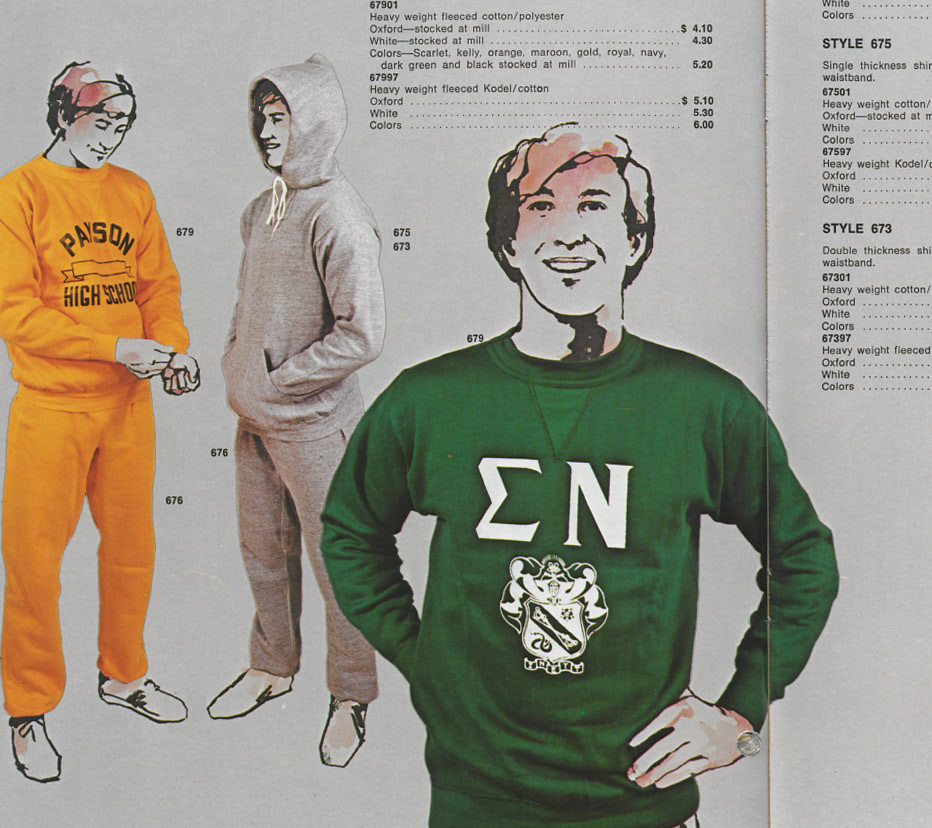 The seminal book Take Ivy by Teruyoshi Hayashida documents ’60s campus life and was, in part, responsible for the explosion in the American influence and Ivy fashion boom in Tokyo. What stands out in the photographs in his book is the abundance of sportswear worn off the field combined with preppy staples such as chinos, penny loafers, and Oxford shirts. By this time, the original button-down polo shirt was solidly in the realm of leisurewear as opposed to sports, thanks to the counterculture of the ’50s, jazz. Purveyors of cool — such as Miles Davis, who was on the cover of Milestones wearing one — transformed it into a wardrobe staple seemingly overnight. But in Take Ivy, you can see the shirt mixing with its sportswear roots, layered under and over sweatshirts, hoodies, and tees.

During his documentation, Hayashida noticed strong support for the college’s sports teams around their campuses. He notes next to a photo of a man in a Brown team sweatshirt, chinos, and loafers: “A student is taking a stroll on a rainy campus wearing a sweatshirt which, of course, is in the school color. Ivy Leaguers are known for displaying their loyalty in their alma mater on a daily basis.” Sweatshirts and hoodies bearing the names and insignia of the colleges and their teams walked up and down the halls. Varsity cardigans also had pride of place, worn before and after sporting events by participants and spectators alike.

These sporty-casual-meets-prep-pick-and-mix fits stayed prevalent throughout the ’60s, rolling into the mainstream and helped by icons such as the Kennedys, who were regularly seen sporting similar looks. 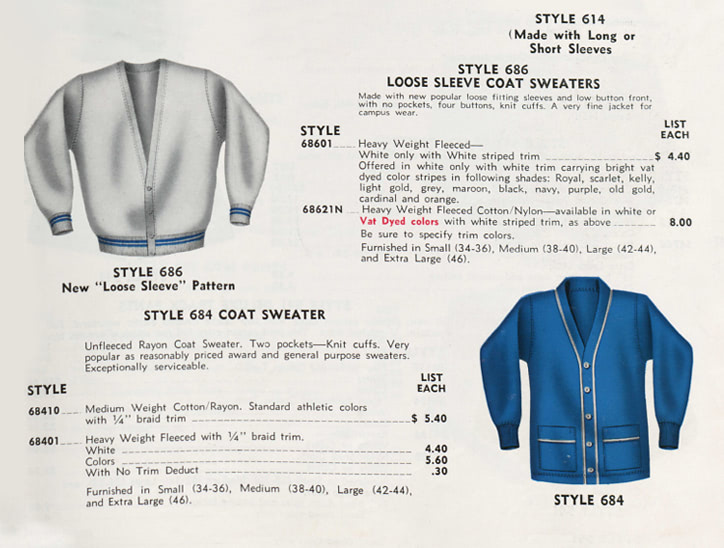 By the ’70s, the hippie movement had penetrated campuses with its abstract shaggy looks, and sportswear staples had broken into everyday wear beyond the colleges. Russell Athletic now started to reap the benefits. The brand began trading on the New York Stock Exchange in 1985 and by 1987, it was included on the Fortune 500. Damien Watt, Product Planner at the UK’s biggest vintage supplier Beyond Retro, attributes some of this to the fact that sports teams and colleges were branching out themselves. With Russell supplying many of them, the chain was working: “The ’80s and ’90s saw a big boom in teams shifting their focus from replica kits to fashion-focused merchandise on all aspects of the wardrobe. It wasn’t just about the replica team shirt or printed tee with a sports logo, but more about the team nylon jacket, tracksuit, or hoodie with big and bold colors, prints, and patterns. It also wasn’t just the pro teams but the American colleges, too.” 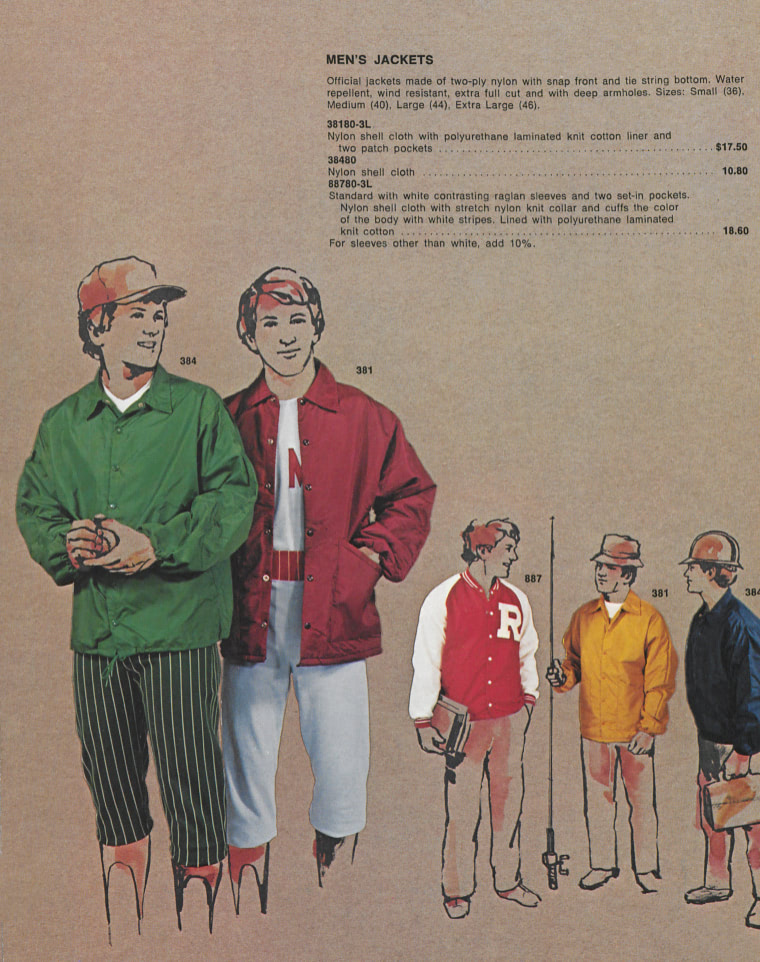 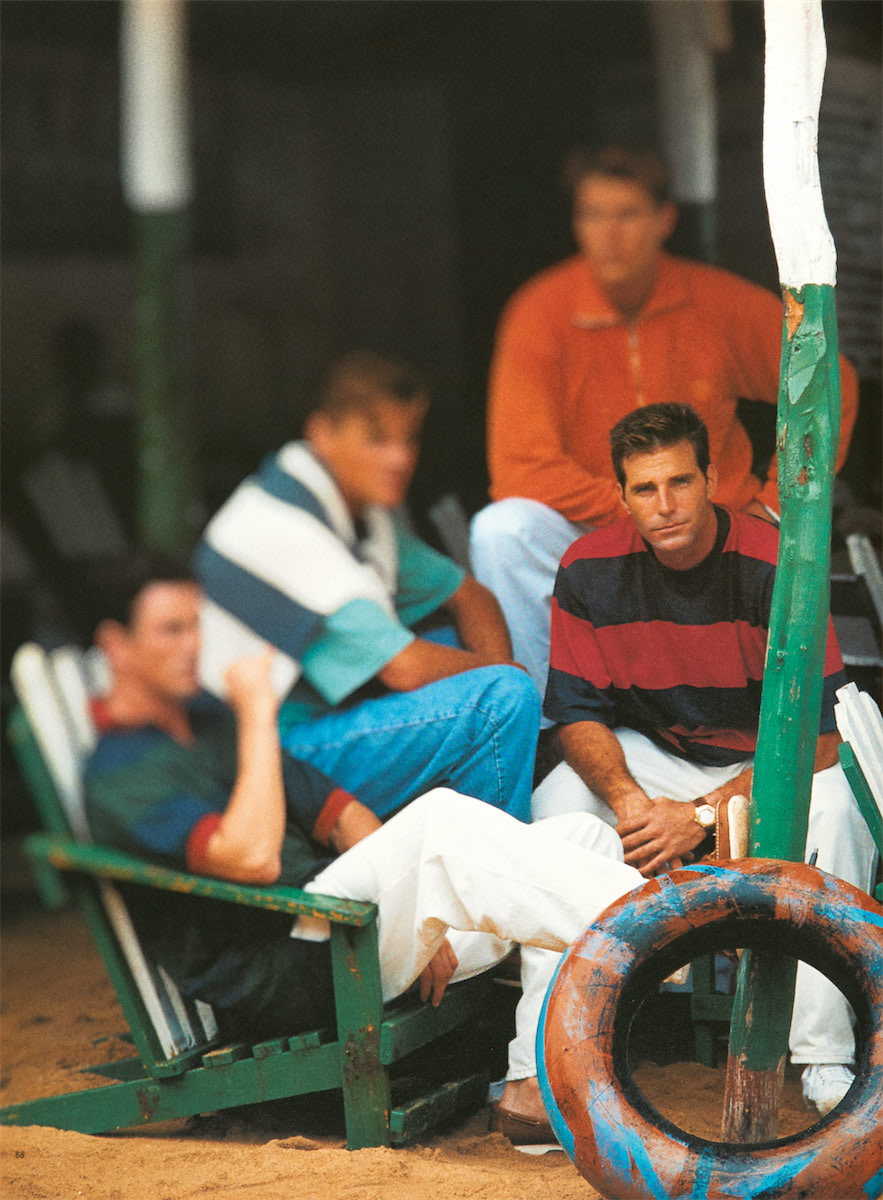 BOSS was established in 1970. As a HUGO BOSS sub-brand, BOSS positioned itself as the go-to label for high-quality tailoring. It wasn’t until the ’80s, though, that BOSS started making moves as it dived into the US market, headfirst. In 1982, Michael Jackson graced the cover of his seminal album Thriller dressed in an all-white BOSS suit. Red carpets, boardrooms, and congested commuter trains were now starting to rock to the rhythm of the generous fits of the BOSS suit. On the back of its tailoring success, BOSS started to branch out into sportswear, which was quite the statement for a tailoring house. In 1985, Sylvester Stallone wore a white half-zip sweatshirt emblazoned with the BOSS logo across the chest in Rocky IV. Something about that big BOSS spell-out branding struck a chord. Joe Louis Peters, founder of Hamburg-based vintage retailer Die Schleuse, prizes ’80s BOSS casual pieces as some of his best finds: “The ’80s pieces we source are insane. Very interesting fabric-blends like cotton, linen, and wool, cashmere, and nylon, for example, great tailoring. Beautifully constructed knitwear with amazing quality.” 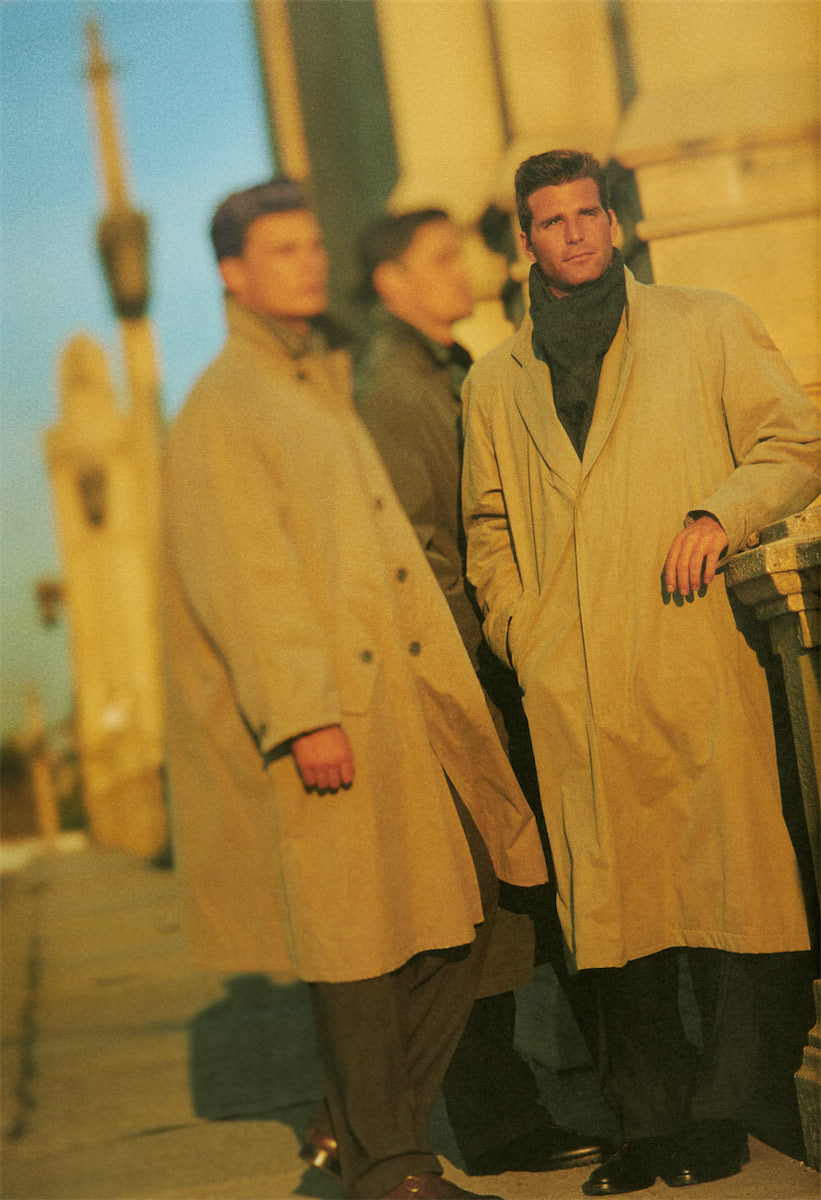 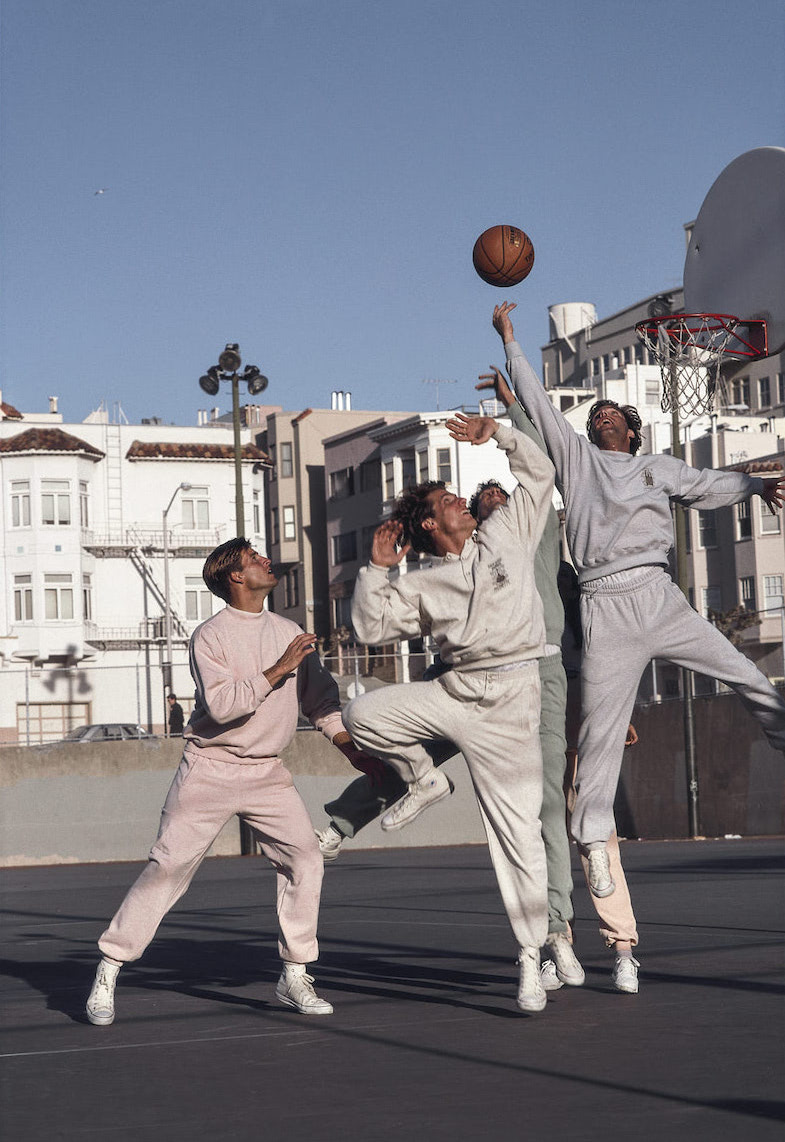 BOSS was putting its tailoring and fabric expertise into the casual range to such great effect that there was even a good amount of bootlegging going around, especially in the U.S., the perfect sign that something was going well for the brand. Something Watt has noticed with the ’80s and ’90s’ BOSS casualwear he finds is its solid branding, in part influenced by the bold college and team sweatshirts Russell Athletic was producing at the same time: “The BOSS pieces I do see have a similar aesthetic to the ’90s sports team prints, big and bold fonts, but what makes it unique to other brands is you could see someone was wearing BOSS from a mile away. No other brand was throwing their logo on sweaters and tees as big as BOSS.”

Suiting took a turn for the baggier in the ’90s. Pleated pants joined boxy suit jackets and re-inventions of that long polo coat. Looking back at BOSS’s archive imagery today, it seems both timeless and of its time. While very much a Wall Street look, this looser style of tailoring was more akin to the rebellious zoot suit of the ’30s than anything coming out of the straight-laced Ivy campuses in the ’60s. This silhouette was starting to take hold in the off-court style of the major leagues of American sports, too, as Beyond Retro’s Watt also notes: “I think the emergence of pro sports in America being propelled on the international stage played a massive role. Michael Jordan was the most recognized face in the world and was known for his oversized suits, power shoulders, and pant legs so loose, his legs were swimming.”

Michael Jordan was the most recognized face in the world and was known for his oversized suits, power shoulders, and pant legs so loose, his legs were swimming

Replica wear and official team merchandise were also being blended with day-to-day looks. Russell Athletic was benefiting from this trend with its official licensing of NFL and MLB gear. Die Schleuse’s Joe Louis Peters explains the brand’s rise even beyond the replica styles: “With equipping whole teams and at some point even whole leagues, Russell Athletic managed to create a universal sports and athletic uniform — with coach jackets, hoodies, and jerseys, they basically created a corporate identity for each team.” Basketball stars would also be seen off the court in full shell tracksuits, another look that took off in the ’90s, thanks to the televisation of these major sporting events.

From there, sportswear’s dominance never slowed. However, the mix of sportswear and a more collegiate-influenced style hadn’t really come back into play. Pockets of street culture like the New York Lo Lifes were reinterpreting Ivy looks and pieces made for the rich, and blending them into their own unique everyday attire in a captivating and exhilarating new way. Wu-Tang Clan, among others, also adopted the look through their associations with the Lo Lifes, but it hadn’t yet broken out beyond those in the know. In the late ’90s and early 2000s, brands like Supreme, Stüssy, WTaps, and later on Billionaire Boys Club were bringing collegiate-inspired pieces into their collections. Varsity team jackets, cardigans, and polo shirts were being reinvented, finally removing the connection to jocks and rich kids.

Highsnobiety Style Editor Graeme Campbell cites its adaptability as the reason it has stood the test of time: “It’s the universality of the aesthetic. Anyone can wear collegiate, no matter the subculture. It can be an indie rock star, a rapper, a Tory politician, anything. The base silhouette is so transferable, and although it’s a cliché, it’s the perfect canvas of expression.” 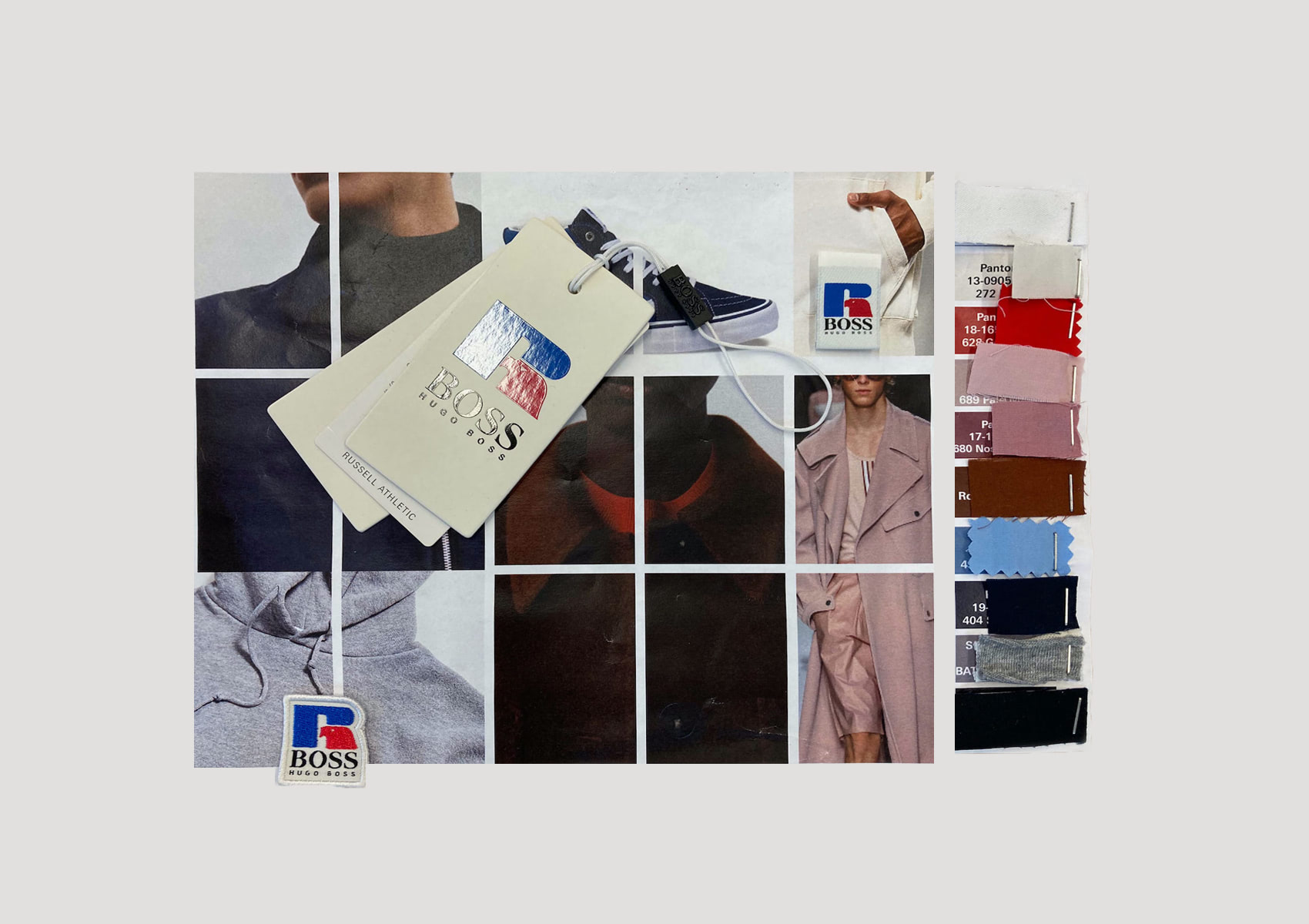 It’s the universality of the aesthetic. Anyone can wear collegiate, no matter the subculture.

Streetwear took over and within its core were those sports staples — the hoodie, the sweatshirt, the coach jacket, and the varsity jacket. Those silhouettes have never gone cold. Now tailoring is creeping into the streetwear picture again. Well thought-through cuts and fabrics mean this time, it’s being taken seriously. In general, suiting has become more relaxed, morphing into a slightly less extreme version of those ’90s BOSS cuts. The blending of sportswear and tailoring and the mix-and-match aesthetic that used to roam the privileged paths of the Ivy League schools is now a look that has been — and should — be appropriated. 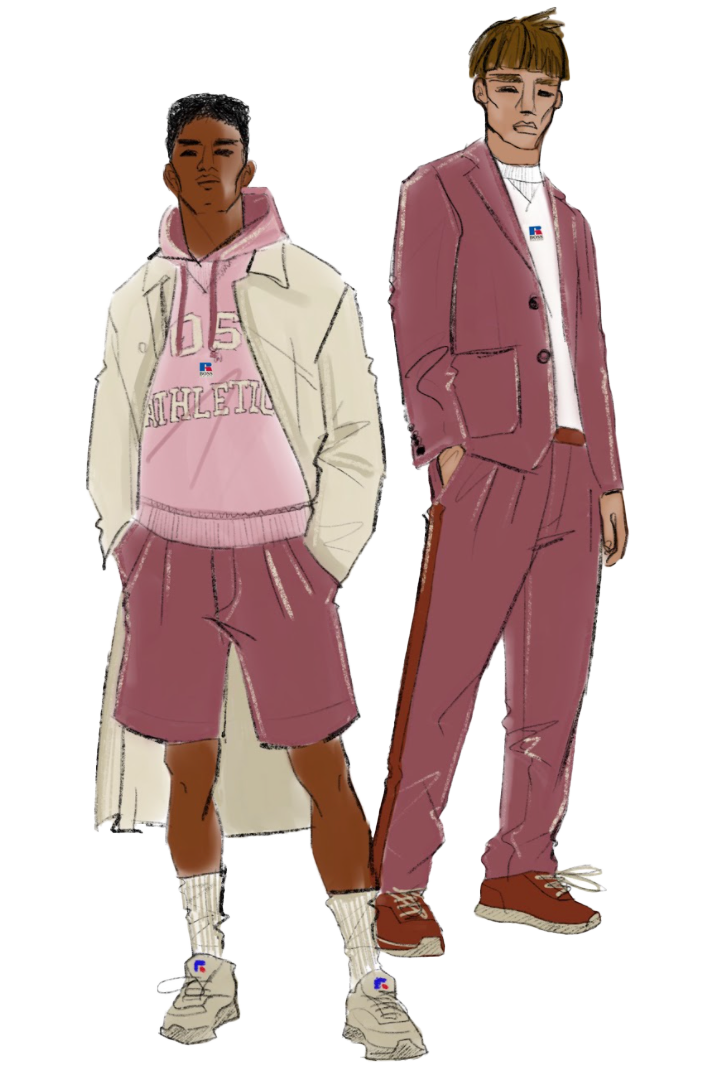 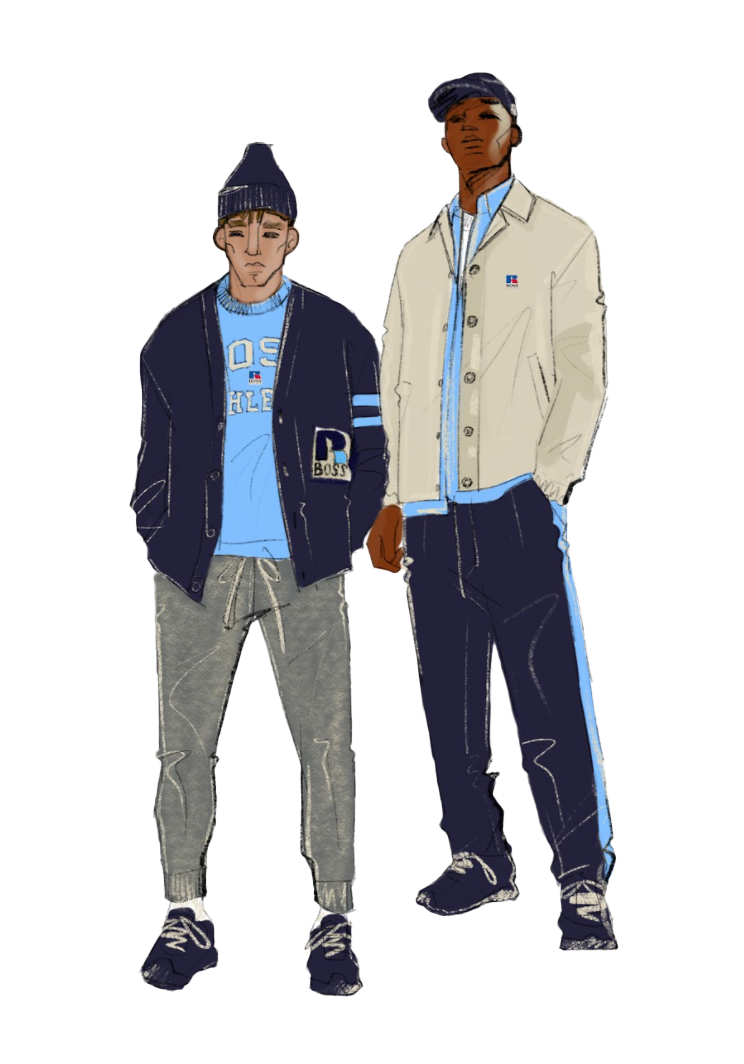 The BOSS x Russell Athletic collection promises to deliver, blending years of heritage in their respective fields and honing in on that ’90s off-court feel.