If you haven’t yet noticed, we’re in the midst of an electric revolution.

Once a distant concept, the future of mobility now rests on the shoulders of electrified vehicles, and it’s easy to see how far the evolution has come over a mere decade: Batteries are smaller and lighter, range is longer, and cars are more efficient and intelligent.

Of the lot, BMW has always championed electrification and sustainability as part of their ethos, and that journey began here in 2014 with the launch of its BMW i3 and BMW i8. The former — a high-roof, all-electric hatchback — and the latter — a sporty plug-in hybrid — were responsible for bringing electric cars into the mainstream here, opening up the doors to convince an otherwise skeptical market. Today, the German marque has managed to put more than 500 electrified vehicles on the roads here, and that number’s only going to get bigger with new models entering the market.

Still, charging infrastructure remains to be the biggest elephant in the room. To address this, the BMW Group’s ChargeNow network – powered by Shell and Greenlots in Singapore – addresses concerns for home and public charging. The network of public charging stations includes more than a hundred slow and fast charging stations island-wide, which can be easily found via the BMW ConnectedDrive in-vehicle navigation console and BMW Connected smartphone app. What makes things even more convenient is that the system shows in real time which chargers are currently occupied or available, and drivers can also retrieve pricing information. Once they’ve selected their intended charging stations, the navigation system provides turn-by-turn directions.

To date, BMW offers the widest range of plug-in hybrid electric vehicles (PHEVs) in Singapore, with even more to come in the near future. Interested in going green without sacrificing power, comfort, and most importantly, luxury? Here are the models to keep an eye out for. 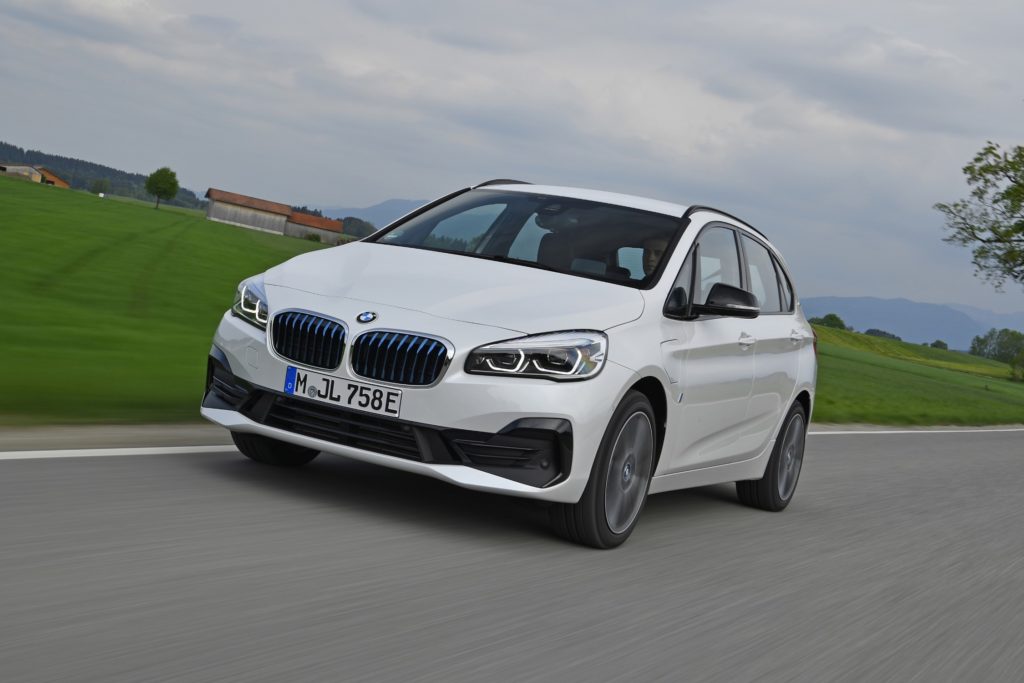 Penned for maximum interior room, this Active Tourer is a plug-in hybrid that lends an unprecedented amount of space and functionality. You might be in a compact multi-purpose vehicle, but the raised seats still promise a commanding driving position, while entry and exits at the rear have been designed to be as seamless as possible for the whole family.

Even the 65kW (88hp) electric motor is arranged in a space-saving position under the rear seat bench so you get the most out of the car. Despite the mounted battery underneath, boot space is still similar to that of its conventionally-powered siblings, with an overall load capacity of 400 litres.

Paired with a 136hp 1.5-litre three-cylinder petrol engine and a six-speed Steptronic transmission, the plug-in hybrid offers a total system output of 224hp and 165Nm to reach top speeds of 202kph. If it’s a fully-electric driving experience you seek, the car switches to a rear-wheel-drive electric vehicle to offer 41km without having to use the engine, and requires only two hours and 15 minutes to recharge using the BMW i wallbox. 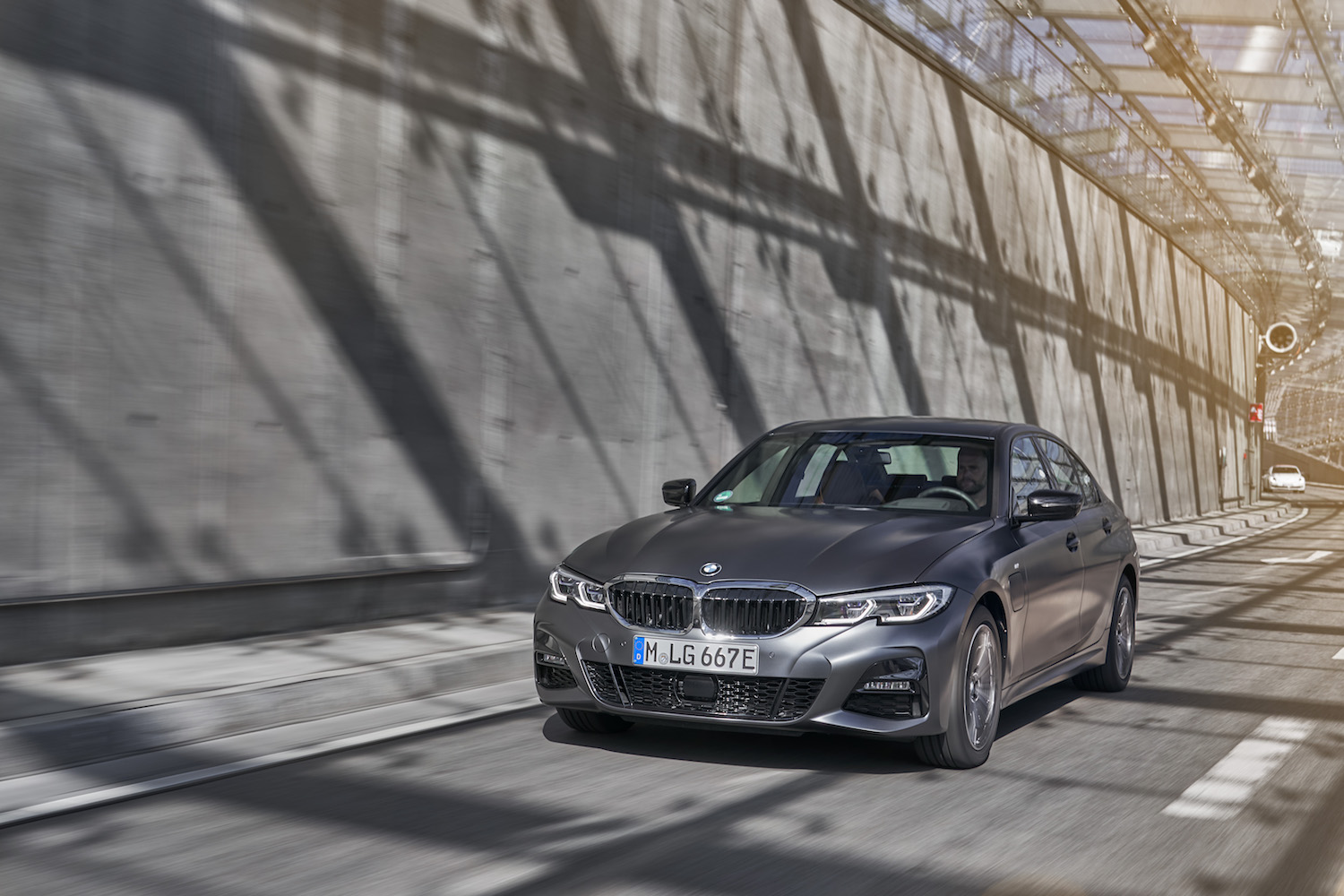 BMW’s electrified answer to its athletic 3 Series arrived in Singapore last year to plenty of fanfare for good reason. Besides its svelte goods looks, the plug-in hybrid also keeps the sedan’s signature driving dynamics intact — with plenty of efficiency to boot.

Thanks to its combination of a 2.0-litre, four-cylinder petrol engine and 112hp electric motor, the car produces a maximum system output of 292hp (with the new standard-fitted XtraBoost) and 420Nm of twist, giving it the ability to complete the 0-100kph sprint in only 5.9 seconds. 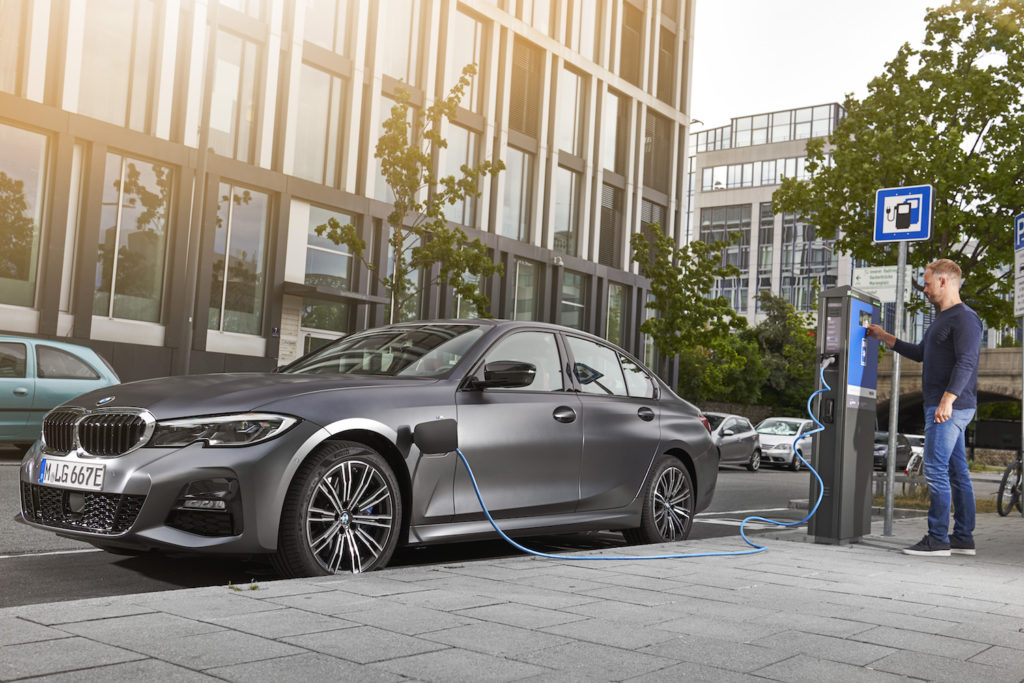 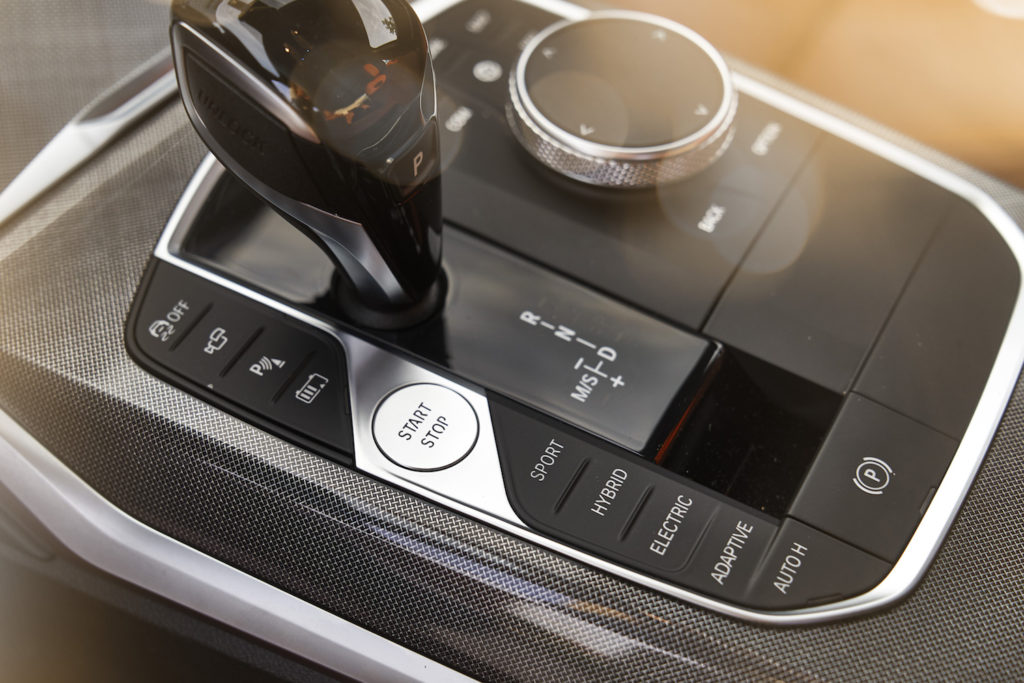 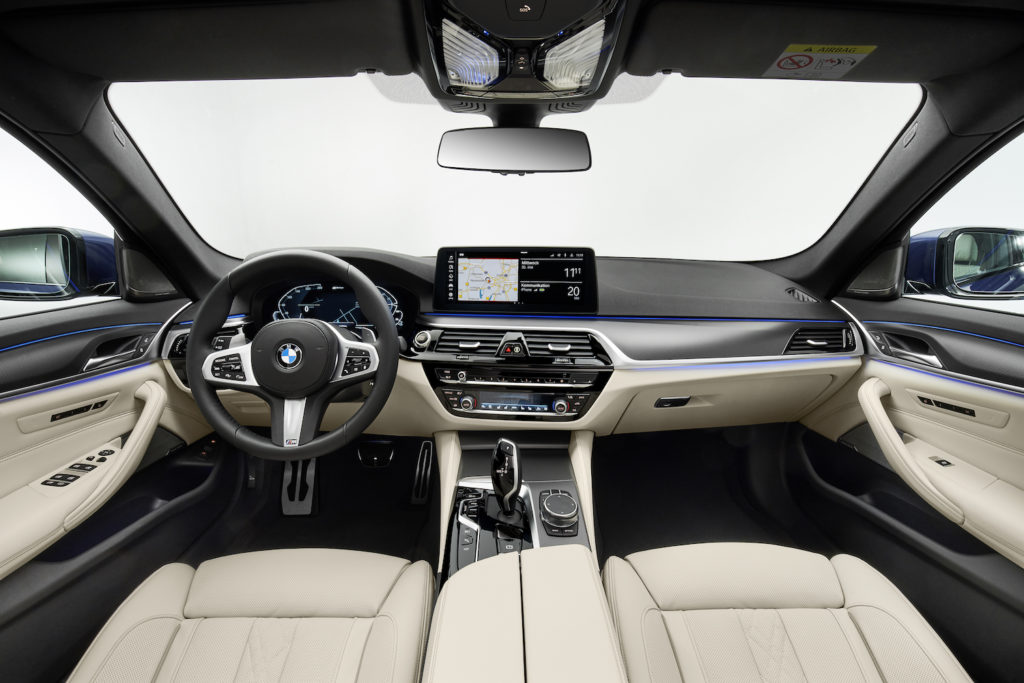 In Hybrid mode, the new 330e sedan is capable of hitting speeds of up to 110kph on electric power alone, which is a sizeable upgrade of 30kph over its predecessor. If you wish to go the whole way with the green movement, it’ll oblige 140kph in Electric mode — again, an improvement from 120kph previously.

Intelligence is key to every BMW and the 330e presents this best with a full selection of innovative comfort- and safety-optimising driver assistance systems, from preconditioning the interiors before you even enter — perfect for Singapore’s perpetual heatwave — to steering and lane control assistance.

Because efficiency is at the forefront of this second-generation PHEV, expect a 15-percent reduction in fuel consumption and emissions, alongside a 50 percent increase in electric range over its previous iteration. 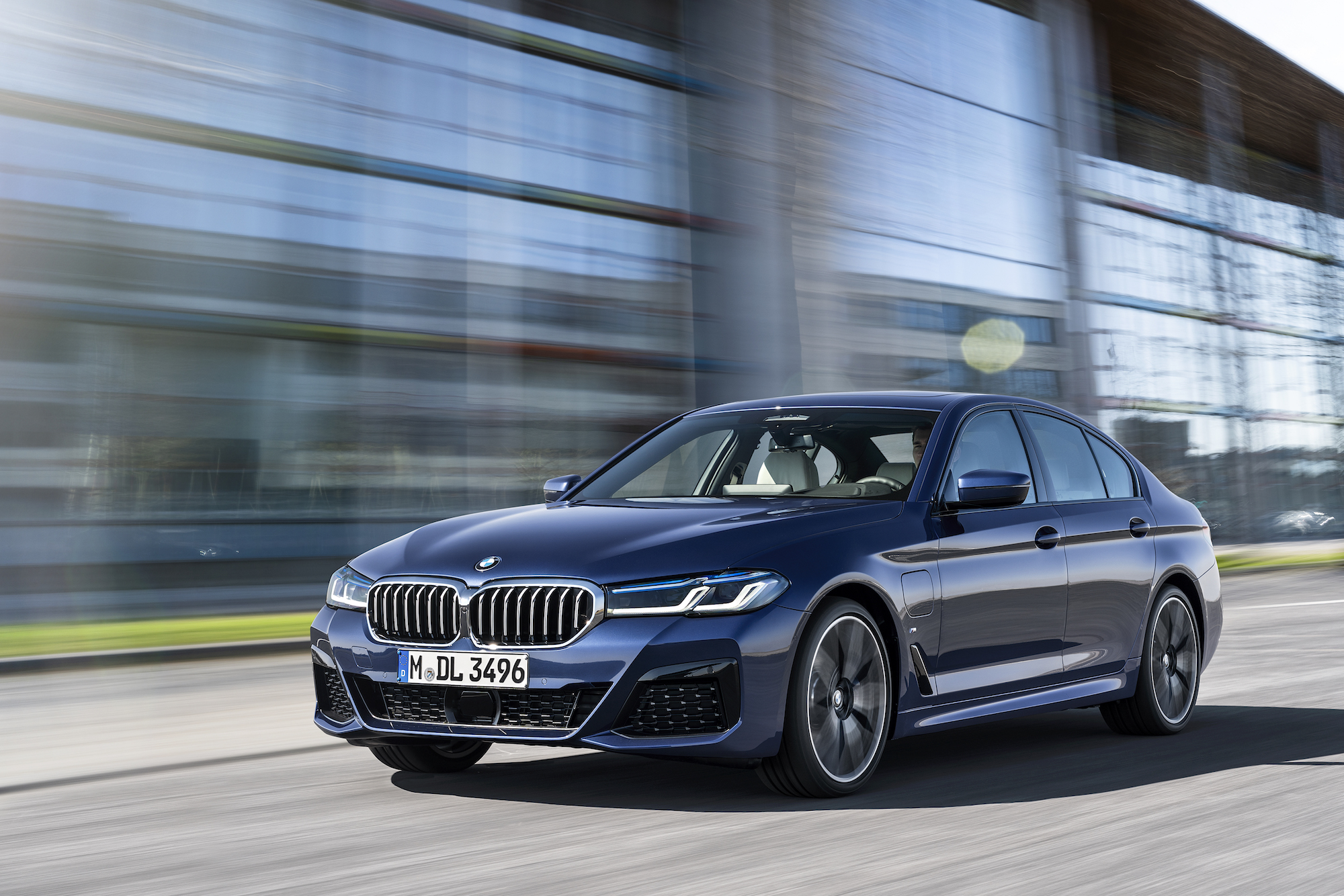 Known around the world (it is the planet’s most successful business sedan, after all) for its sheer composure on the road and penchant for refinement, the 5 Series injects its sporty take on luxury into the plug-in hybrid segment with the 530e.

This eco-friendly iteration sees an 80kW electric motor that’s paired with a 2.0-litre, four-cylinder petrol engine to give a system output of 292hp and 420Nm at its disposal — enough to complete the 0-100kph sprint in 5.9 seconds. In default mode, the car’s intelligent system optimises petrol and battery power to ensure you’re getting the most out of its traditional and electric juices, but should you want to cruise purely on the latter, it’ll oblige up to 50km — almost one and a half times the length of Singapore. Still, they both work in pure harmony, with transitions so seamless during the drive that you wouldn’t so much as notice until the roar of the engine comes back on.

As a jump-in-and-go plug-in hybrid solution for your daily commute, the BMW 530e is an impressive package, with the same level of detail within as its more “traditional” counterparts. 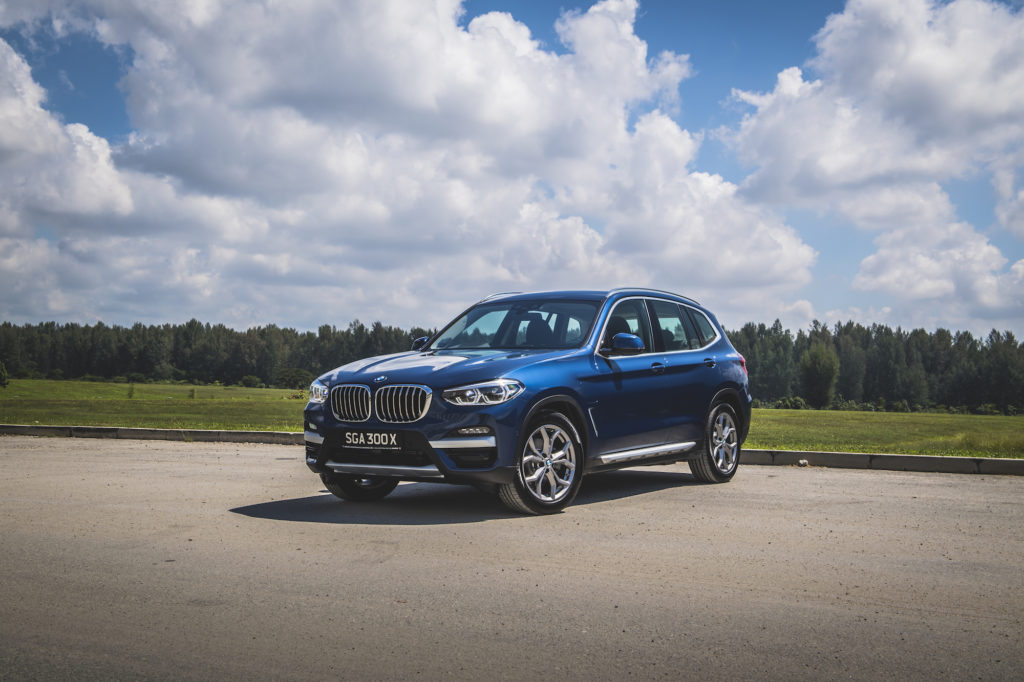 As the ultimate vision of a family Sports Activity Vehicle (SAV), it’s no surprise that more than 1.5 million units have rolled off the assembly line in the first two generations alone. In keeping with the growing green movement, however, the hot-selling model is now also available as a plug-in hybrid, lending even more sensibility to this already luxurious and dynamic crossover.

Equipped with a 2.0-litre, four-cylinder combustion engine and an electric motor, the 292hp xDrive30e hybrid blends sporty acceleration with flexible range. Agility and sportiness still remain to be a big part of the car’s DNA, so much so that the BMW xDrive system permanently distributes the drive torque between the front and rear wheels as required – even when driving purely on electric power. 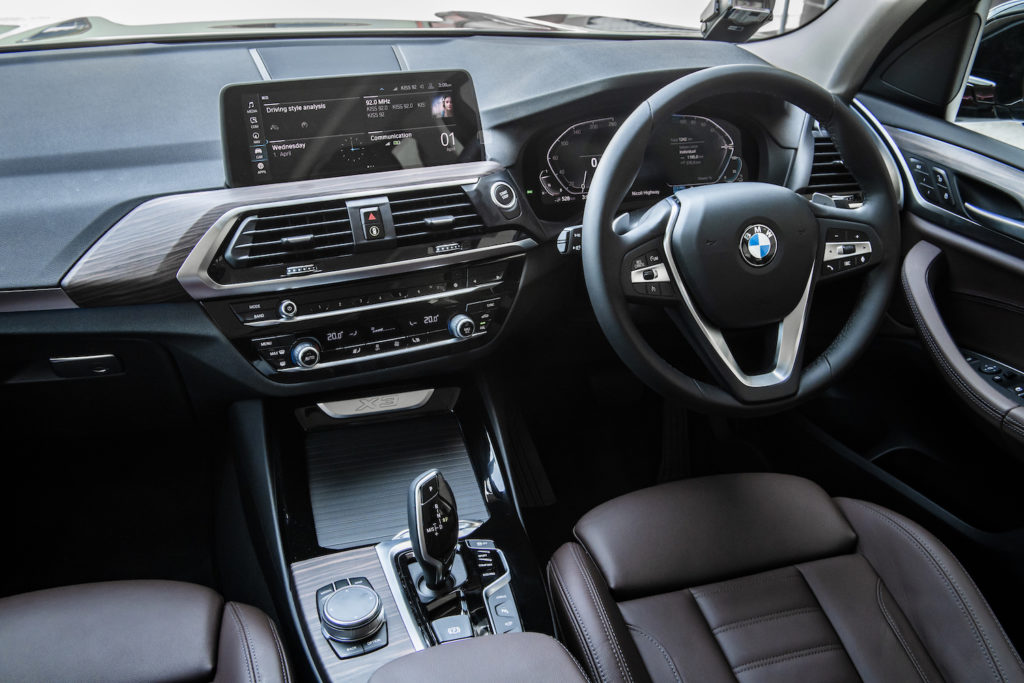 Along with an eight-speed Steptronic transmission, the car accelerates from 0-100kph in a rather pacey 6.1 seconds, before going onto a top speed of 210kph, ensuring that your fuel-efficient family trips are still plenty of fun.

Inside, the X3’s elevated driving position affords plenty of visibility and comfort, with a multi-faceted digital instrument display, infotainment screen and the optional head-up display for an air of modernity. Recharging this state-of-the-art hybrid requires three and a half hours with the BMW i Wallbox. 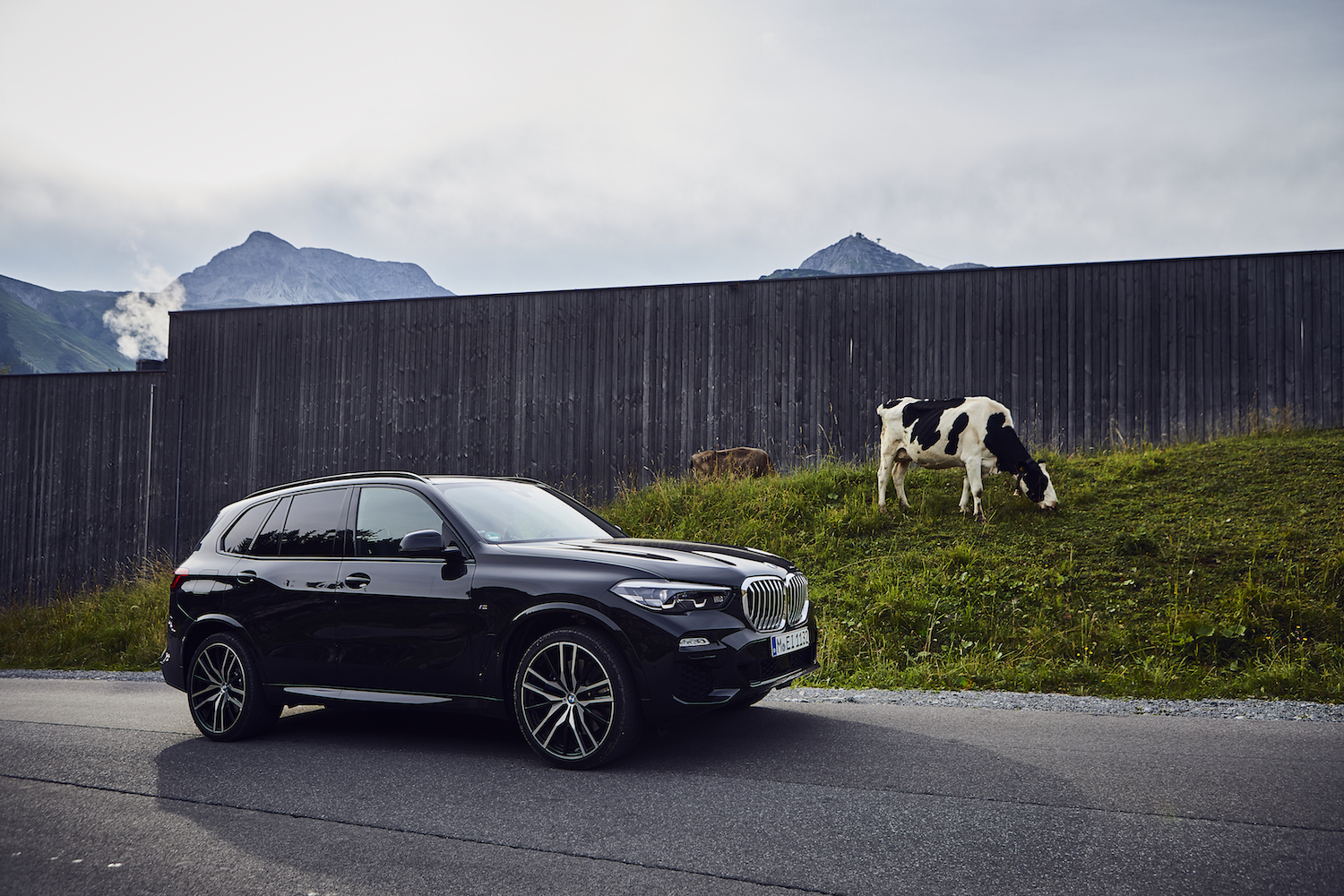 As if being designed to handle both expressways and difficult terrains with the same comfort and plushness as its petrol-driven counterpart wasn’t impressive enough, the X5 xDrive45e also combines the potency of a six-cylinder petrol engine and the latest BMW eDrive technology to become even more efficient than its predecessor.

Thanks to a bigger battery, expect 394hp and more than triple the electronically powered range to give between 67 to 87km. A navigation system pre-empts the driver when the vehicle’s battery should be charged and when the optimum time for using the electric motor is based on the route, ensuring that every ounce of juice you get from the car is well utilised and managed. 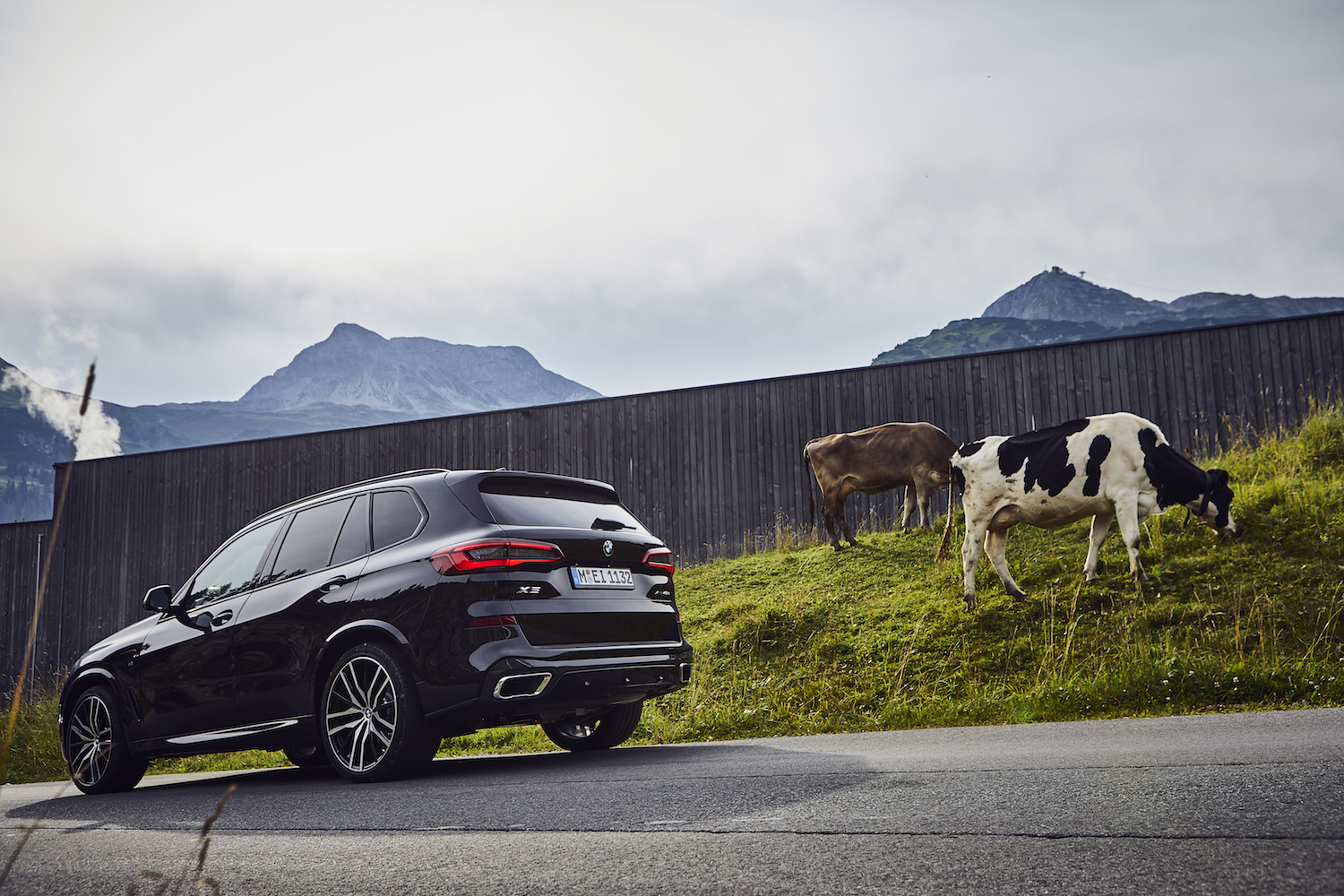 It might be a car made with discerning gearheads in mind, but things are as luxurious as ever inside, with supple leather, beautifully-finished wood, and high-quality soft-touch materials enveloping the cabin. There are few cars on the road that can match the level of luxury and refinement that BMW’s 7 Series offers. With its mid-life update comes new engines, including a plug-in hybrid called the 745Le xDrive.

Instead of a 2.0-litre petrol engine like its predecessor, this updated variant sees a 282hp 3.0-litre, straight-six under the bonnet that’s paired with a 111hp electric motor and a new high-voltage battery under the boot floor.

The all-wheel drive is more than capable of gliding along in full electric mode for 50 to 54km — which is plenty efficient for city driving. Squeeze the throttle for a bit more power and the petrol engine intuitively roars to life. Performance is also taken up a few notches, with the 0-100kph sprint completed in 5.1 seconds and an overall top speed of 250kph. 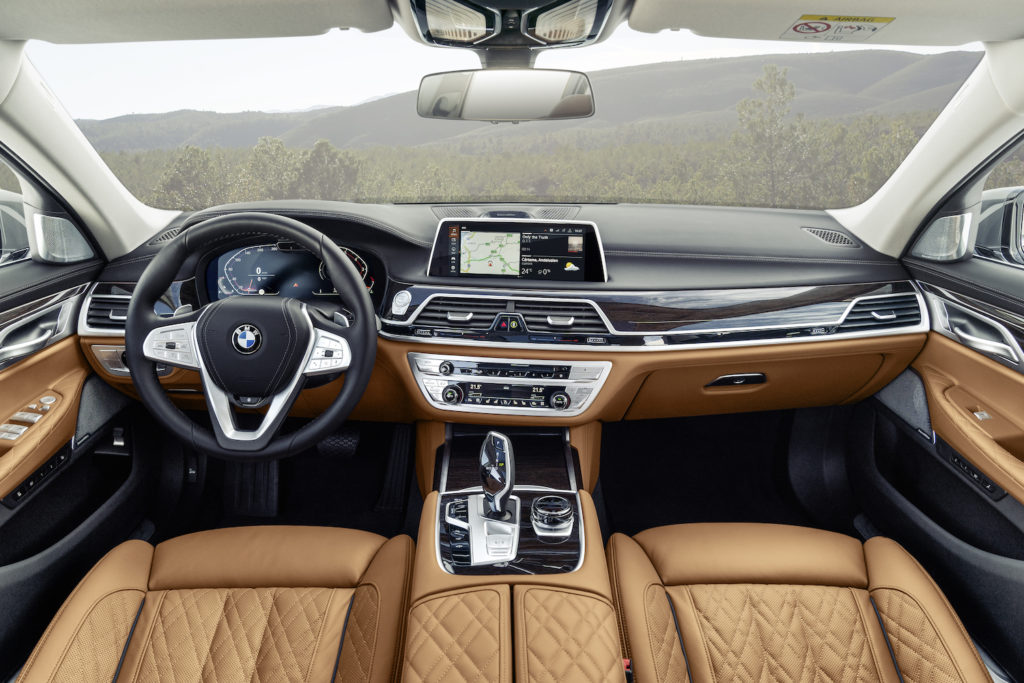 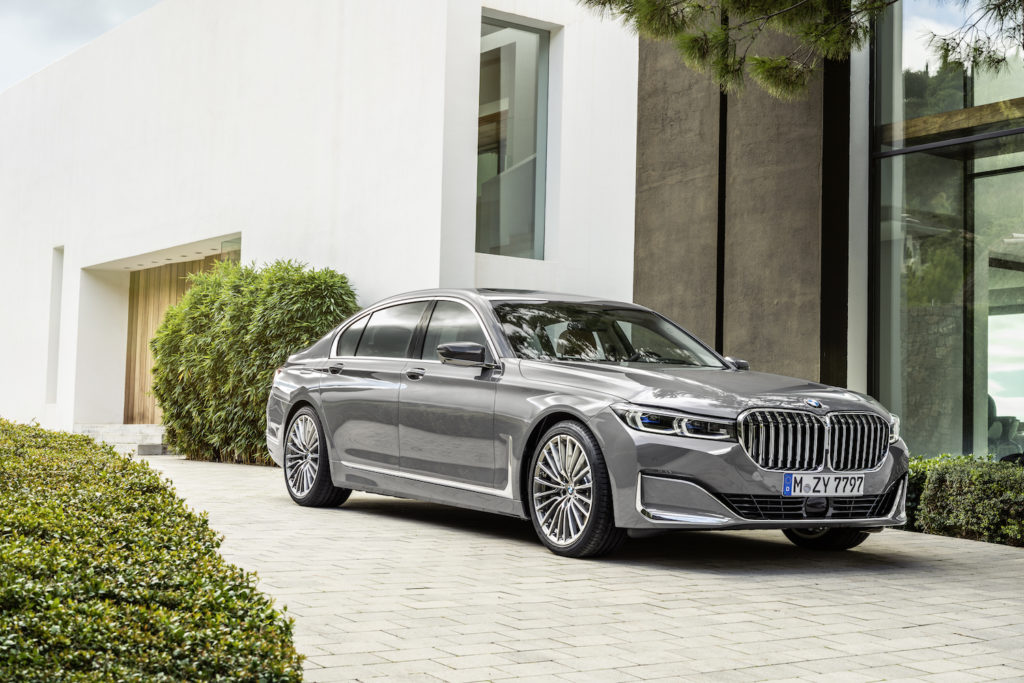 Different driving modes can be selected via the control panel in the centre console, each tapping into the brand’s know-how in efficiency, power and comfort to ensure every journey’s perfectly catered to your needs, whether it’s to be as eco-friendly or dynamic (or even both) as possible.

Inside the colossal ride is a clean, with a modern cabin and cockpit that offer design tweaks to put even more convenience and comfort in the driver’s hands. Besides sumptuous leather, a fully digital display, and optimised acoustic comfort, the car is also equipped with the helpful BMW Intelligent Personal Assistant, and the BMW Concierge services for recommendations on the best cafes, restaurants, and attractions to visit.