The Black Panther is receiving a superhero’s welcome in Audemars Piguet’s palace.

In part of what is said to be a long-term partnership with Marvel Comics, the new Royal Oak Concept “Black Panther” Flying Tourbillon (offered for CHF 150,000, approximately $161,824 at current exchange) is just the beginning of many co-branded timepieces to come. First to arrive in the newly forged AP x Marvel universe, the Black Panther lunges over the hour and minutes hands and the tourbillon at 6 o’clock. The imposing figure, crafted in white gold, laser-carved and painted by hand, takes up nearly the entire surface of the dial save for glimpses of laser-textured titanium bridges—the barrel bridge under the arm at 10 o’clock and the bridge for winding and setting the mechanism under the other arm at 2 o’clock—in black and gray PVD coating in the background. 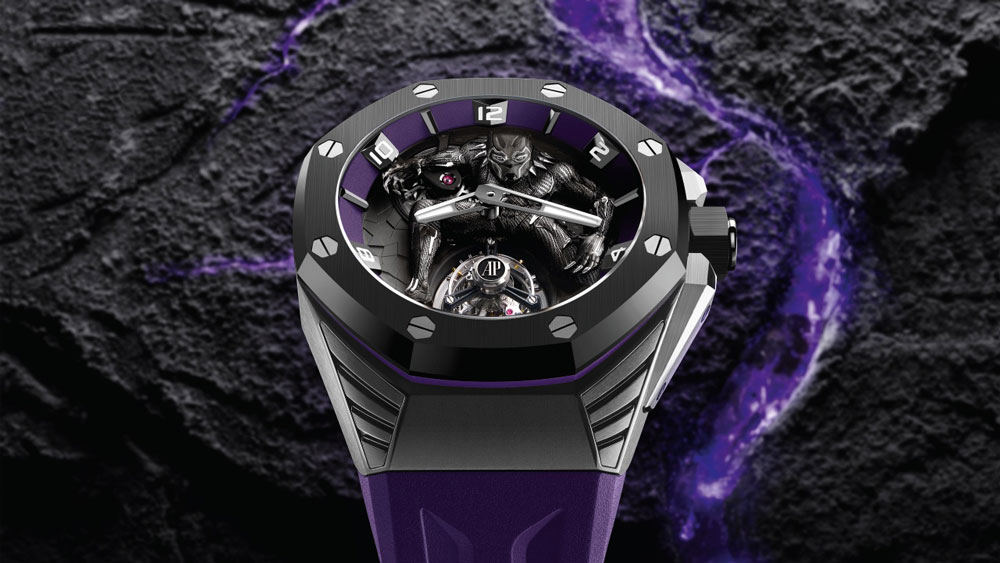 As you might imagine, crafting the detailed figure was no small task, requiring new tools to be created so it could be designed, assembled and fit onto the movement. First, the volume and shape is cut in a white gold disc via CNC machining. Next, the texture of the suit is carved out by laser. Then it’s meticulously hand-engraved, from the hands and claws to the muscles and facial features, by a single craftsman. Finally, a single painter decorates the eyes and applies several layers of dark paint on the suit for texture and contrast. Some parts have been left unpainted and hand-polished, so that the figure has alternating matte and mirror surfaces. The painting and engraving require 30 hours of work per piece: In total, four engravers and four painters were employed to create 250 pieces. 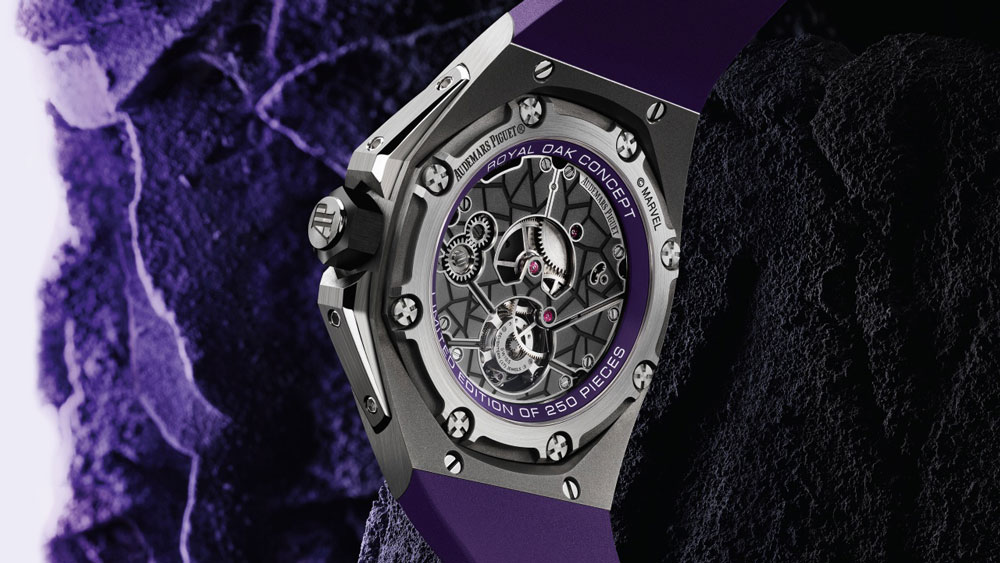 Beneath its centerpiece, the watch is powered by the Caliber 2965, a hand-wound mechanism with a flying tourbillon first released in the RO Concept Collection in 2018. Visible through the sapphire-crystal caseback are the titanium geometric bridges sandblasted and coated with black and grey PVD coating, the back of the tourbillon cage and part of the gear train. The dial side also offers a peek at the open-worked barrel at 10 o’clock and the coiled mainspring, providing 72 hours of power reserve.

All of this horological fantasy comes wrapped in a 42 mm titanium case with an octagonal black ceramic bezel and crown. The case and bezel have been satin-brushed. The case has satin-brushed and chamfered titanium inserts, while the bezel has satin-brushed steel hexagonal screws. Lightweight enough not to weigh you down when combatting whatever real-life villains cross your path, the watch’s purple gasket and rubber strap add extra flair in case you need to exert your superhero status.

And while you might need superhuman powers to get your hands on one of the 250 pieces, the good news is there should be another hero for your wrist in the future.