Want to go on an adventure with Bell & Ross? Too bad, you’re coming.

With a history so steeped in aeronautical instruments and pilot’s watches, Bell & Ross knows exactly how to get the repressed traveller in us excited again. The Paris-based manufacturer’s GMT models, in particular, have managed to fuse its love for the skies with the functionality of cockpit instruments, and the complication has made its way across both its modern offerings and the Vintage line. 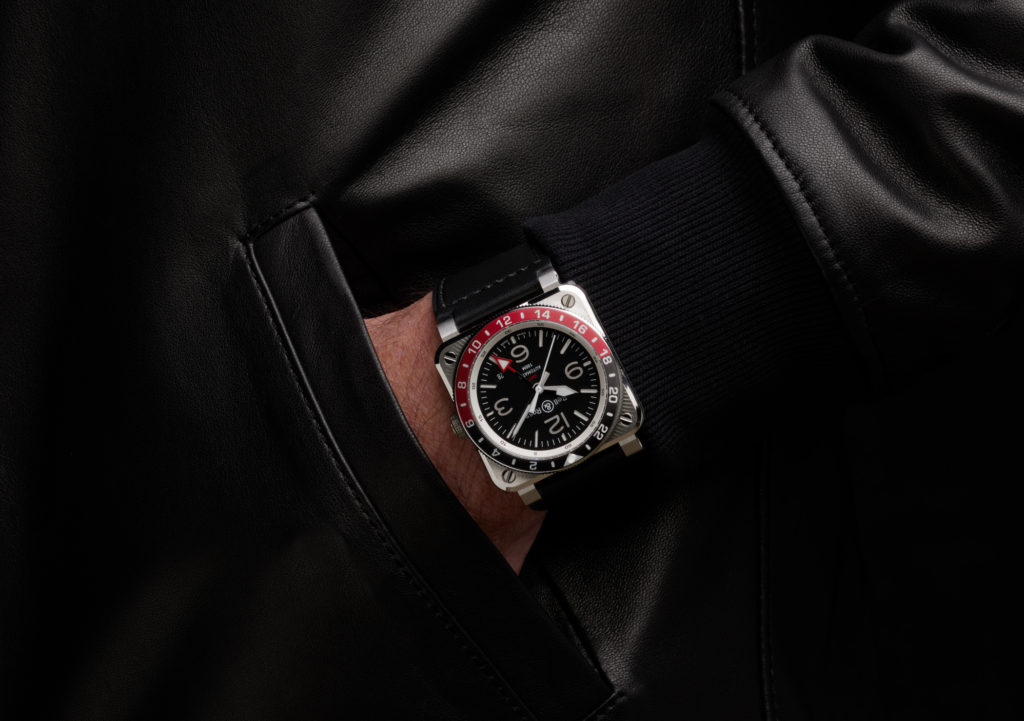 Its first instrument with the complication surfaced in 2007 with the BR 03-51 GMT Titanium, which saw the pioneering use of high-tech materials like brushed titanium and carbon fibre. A full carbon version continued the brand’s legacy for high-performance timepieces later in 2013, and the rest, as they said, was history.

This year, Bell & Ross ups the ante for aspiring adventurers with the BR 03-93 GMT, an update on its traveller’s watch that is equally contemporary and utilitarian. The new BR 03-93 GMT will replace the existing version as the new flagship model and will sport more modern, functional, and readable features. Keeping the circle-in-a-square aesthetic that’s now iconic to the brand, the watch houses a black sunray dial that contrasts with the large white photoluminescence numerals and indexes for maximum legibility.

This monochromatic colour scheme might appear ordinary, but is in fact ingrained into the brand’s DNA, echoing the very same colours that flight instruments use because black prevents reflection while white ensures optimal reading under any circumstance. 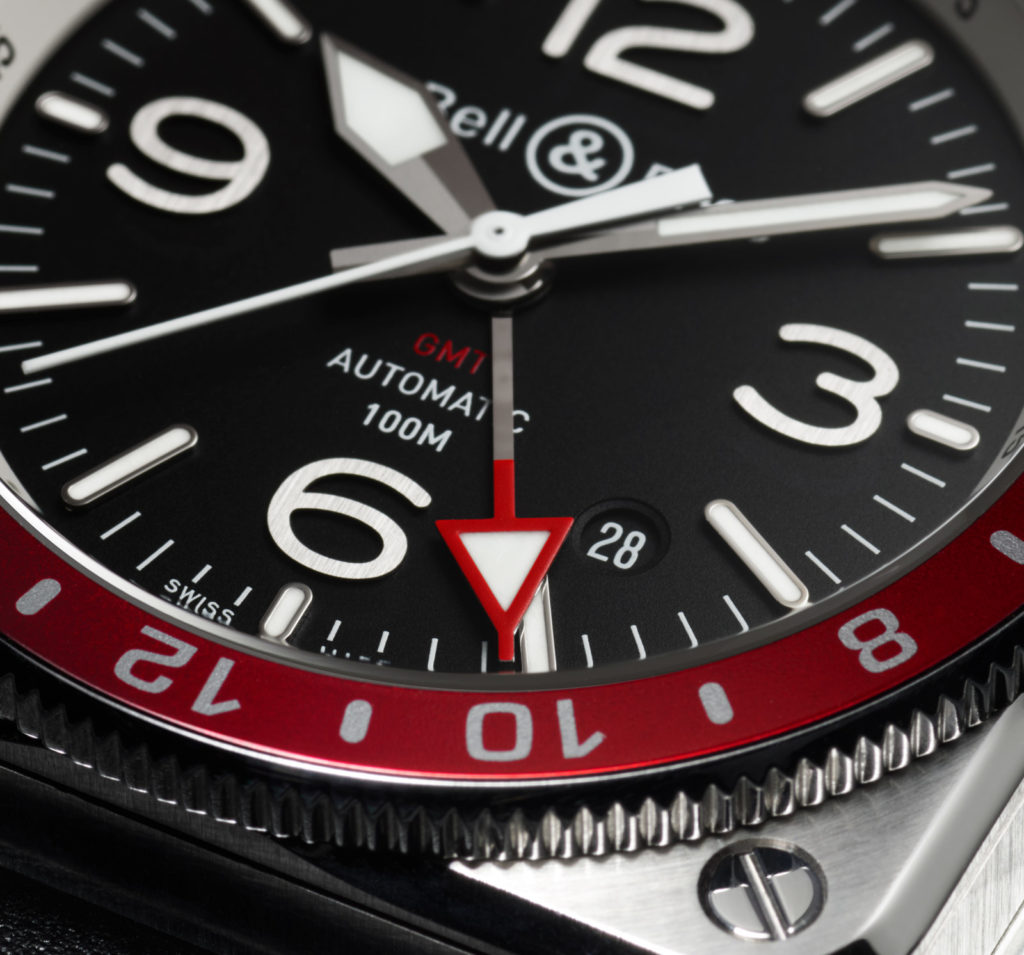 With the ability to provide the time in three different locations around the world, the watch will prove to be extremely useful for long-haul travellers once restrictions are lifted.

The GMT hand is now marked by a large red triangle and makes its way around the dial in 24 hours to display the second time zone. Yet you’ll be hard-pressed to keep your eye away from the bi-directional bezel, which finds its way onto the iconic silhouette for the first time via a two-toned colour scheme. This stainless steel bezel not only indicates the day and night but also allows the easy reading of a third-time zone; simply rotate it to subtract or add hours.

Inside, the watch remains the same as its robust predecessor, with a BR-CAL.303 automatic movement that provides a 42-hour power reserve. Because the crown independently sets the GMT hand in one-hour increments, it allows for the quick setting of different timezones without interfering with the hour hand. 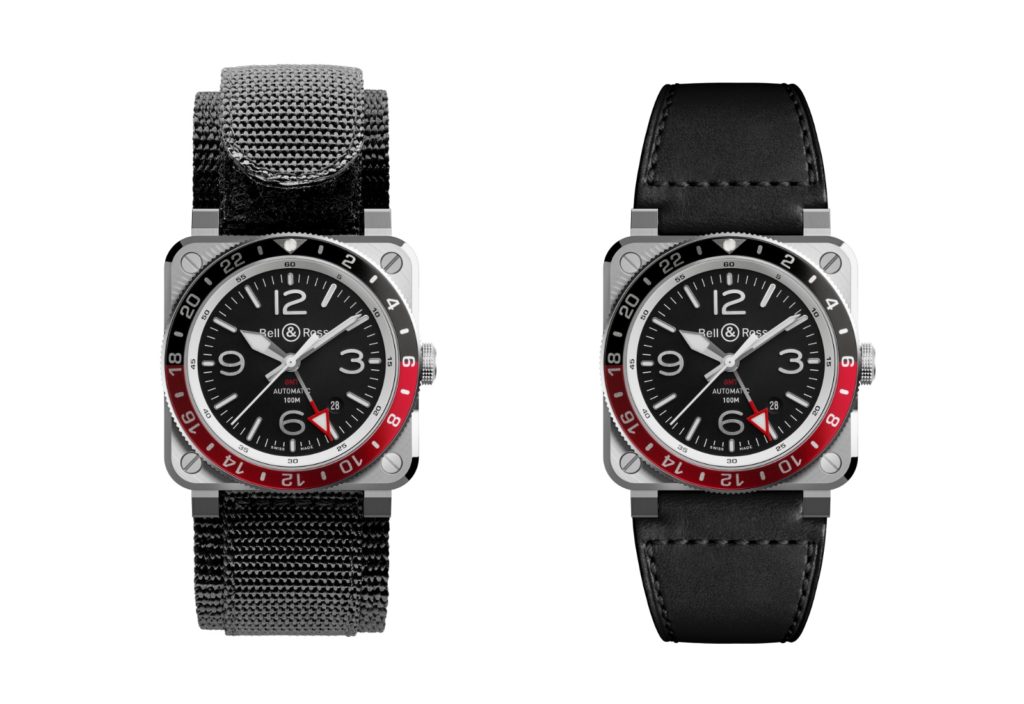 Aviation is at the very heart and soul of the brand, and the BR 03-93 GMT exudes this very confidence in creating functional and stylish tools for the modern explorer, all while meeting the needs of aviators and most importantly, pilots. Expect the watch to come with a smart matte black calfskin leather strap, as well as an additional black synthetic fabric strap that’s resilient enough for your everyday adventures.