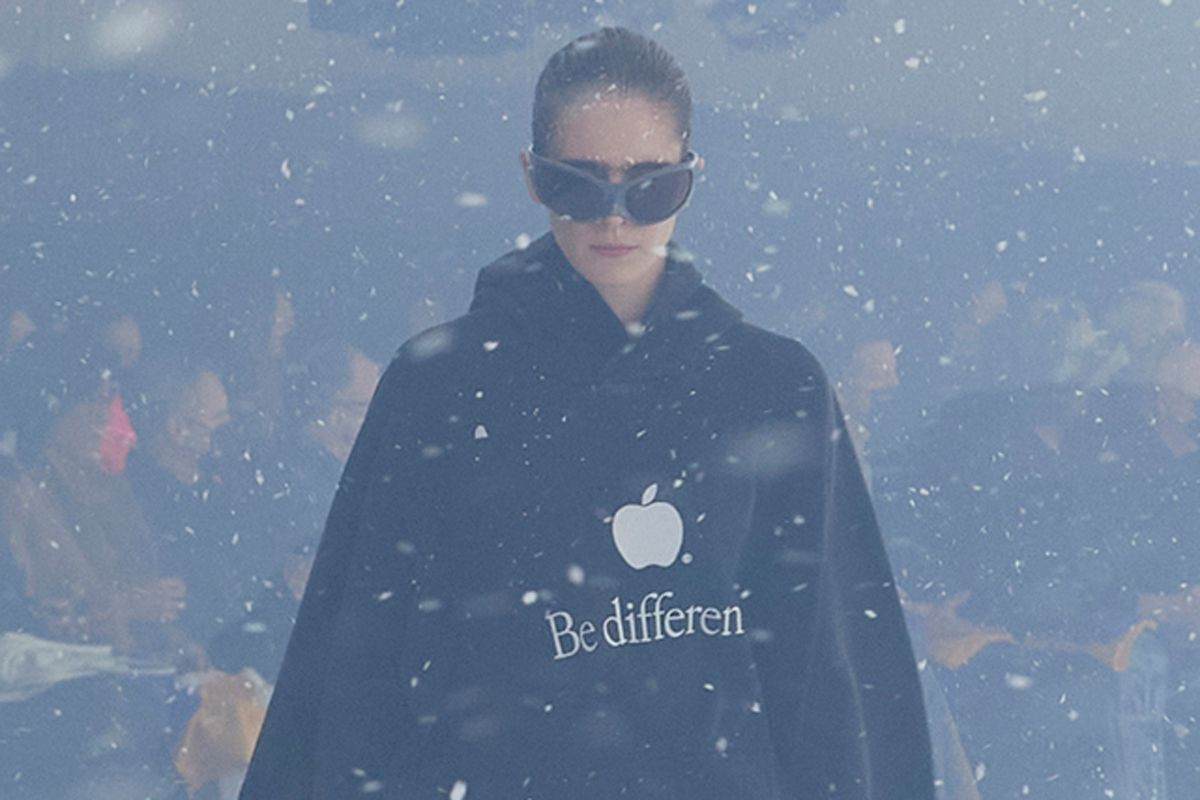 After Balenciaga‘s show invites and its FW22 runway presentation, I think the question on everyone’s mind is: is Balenci-Apple a thing?

While the two haven’t officially announced a collaboration, it definitely looks that way, especially to fans of both powerhouse brands.

In 2020, Balenciaga joined Apple Music, where Demna curated a playlist to accompany the label’s “Hello, My Name Is Demna” merch.

In 2021, Rammstein got in on the fun, tapping in with Balenciaga for limited edition merch and a special Apple Music playlist for the German bands’ obsessives.

Before its FW22 show on March 6, Balenciaga’s PR sent out cracked iPhone 6s invites, triggering iPhone users globally with traumatic broken phone experiences. The Balenciaga engraved the runway show details on the back of the device alongside the familiar bitten apple logo.

Then, the FW22 collection unveils a sort of knockoff Apple hoodie, boasting an untouched apple motif matched with “Be Different” — a clear flip to Apple’s nipped fruit and “Think different” slogan. Coincidence? I think not.

However, the so-called Balenciaga x Apple collab has yet to be confirmed by either brand. But, you can’t help but wonder what is fashion’s hottest label and tech’s biggest company up to?

In February, Kanye West took a decisive stance against music streaming services, turning down a $100M deal with Apple Music for DONDA 2.

Perhaps, Apple is looking to expand into the fashion world as artist pullouts and streaming uncertainties infringe on the namesake music platform.

What better way to get Apple’s foot in the fashion door than with the industry’s most sought-after brand, Balenciaga? In 2021 alone, the Demna-led brand infiltrated the video game world with Fortnite, virtual reality with its SS22 collection, and even pop culture with The Simpsons’ special.

While the potential collaboration could be an issue for Balenci-obsessed and Apple Music-opposed Ye, Yeezus himself won’t be able to hold back the power of Balenciaga x Apple (if it’s even a thing).