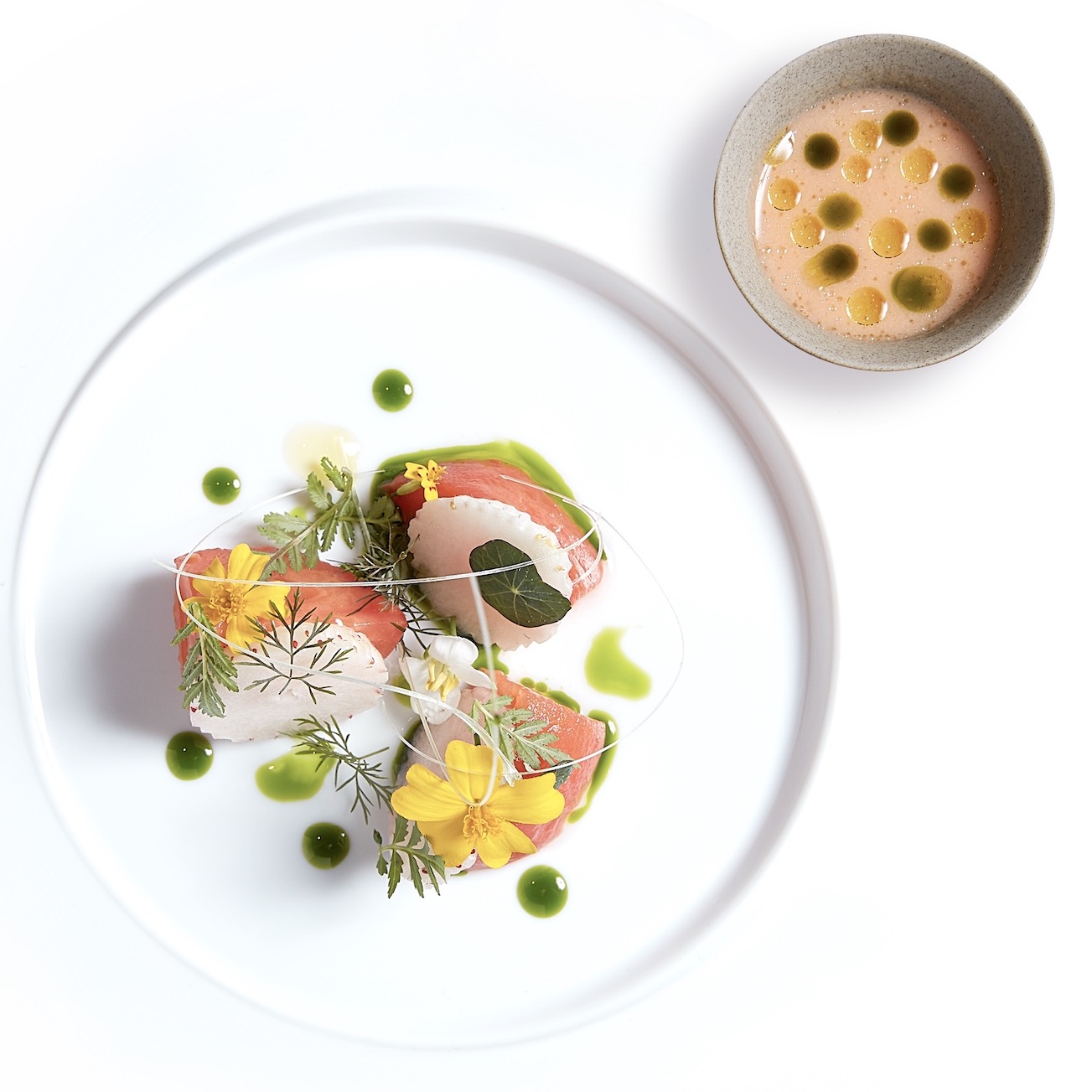 On a recent Saturday afternoon, the fragrant smell of Arroz Caldoso, a rice soup, wafts through Andō, the dining concept by chef-founder Augustin Balbi that’s recently been awarded its first Michelin star.

On the menu, a gastronomic journey that encapsulates Balbi’s life and experiences between two continents, the restaurant’s most acclaimed dish is called Sin Lola – without Lola – an ode to the chef’s late grandmother.

“The dish that best describes the restaurant is the Arroz Caldoso, a very traditional Spanish dish with some Japanese aspects,” Balbi tells me as we sit at one of the restaurant’s tables in Central. “Many local guests also relate to it. So, rather than being a dish that comes from a specific place, we think of it as a dish that connects cultures, which is what rice does for me.”

At Andō, the humble Arroz Caldoso is an explosion of deep and unforgettable flavours and textures. Every spoonful of the soup, which features Yumepirika rice, Spanish baby squid and Cecina (cured Spanish beef), is both a celebration of Mediterranean aromas and the richness of Japanese broths.

For Balbi, the dish and the concept behind the restaurant represent, first and foremost, the culmination of a journey that started in his home country, Argentina.

“My idea of cooking originated a long time ago, when, instead of going to Europe, I decided to go to Japan. I knew that at the end of this journey I wanted to create something very different,” he tells me. “I could have easily gone to Spain, because I speak the same language and we basically share the same culture, but at the end of the day I felt that I was going to end up opening just another restaurant, because many people before me had already done that. Not many chefs from Argentina, however, travel to Japan to master the art of cooking. Who I am today is just a reflection of that.”

Andō’s dining room, similarly, is also evocative of Balbi’s ventures. The decor, at first glance minimalistic, is full of small details that subtly tell a story. For the chef, the central piece of art, a shellfish, represents the constant need to be adventurous and to think differently. “Conceptually, you need to be brave enough to taste shellfish, because you don’t know what’s inside – and that’s the same with my story and my style of cooking. It’s not just about what we eat but also how and why.”

Blending different cultures through food is nothing new. Fusion cuisine, for better or worse, has defined the gastronomic trends of the 2000s. What’s recently been elevating and giving new life to this concept, however, is the understanding and rise of third-culture food, which brings intimacy and personal experiences into the conceptualisation of the dishes. As cultural boundaries are dwindling, chefs, foodies and citizens of the present and the future feel increasingly represented by this trend.

“Actually, this concept applies to entire countries,” says Balbi.. “What is Argentinian food really? What is Australian cooking? We come from a new world, we have been colonised by someone else,” Balbi explains. “Ancient traditions were mixed with things that were there already and some things have sadly been erased.

“For me, we really need to find ourselves, somewhere, somehow. Find something to describe our cooking and who we are. I started from my roots because I grew up with Spanish flavours. Then I learned Japanese culture and Japanese cuisine. But we obviously don’t do Japanese food at Andō, and we don’t do Spanish food. We don’t do paella with sushi on top. We deliver a message in which two worlds meet.”

In Balbi’s case, the Japanese leg of his journey turned out to be life-changing for both his career and personal life. After moving to Tokyo, where he spent six years without knowing a word of Japanese, he eventually learned the language and met his wife. Her family and friends, he tells me, have helped him understand the cultural and social norms that he’s put into Andō, which embraces the principles of the country’s celebrated hospitality tradition.

“I think that any chef – and whoever says the contrary is lying – aspires to have a Michelin star; it’s one of those things that you really dream of,” He tells me as we talk about Andō’s recent – and most coveted accomplishment. “I left Argentina because of Michelin, as there’s no guide there. As soon as I learned about that, knowing that I wanted to work in Michelin-star restaurants and maybe one day have one, I left.”

While most kids in Buenos Aires, at some point, dream of becoming famous football players like Maradona and Messi, when it was time to “be serious”, Balbi, inspired by Lola, whom he fondly remembers as a woman who would always showcase her love through food, decided to pursue a culinary career.

“Part of having Spanish roots means that, culturally, food and the way it’s consumed are so special. Going to my grandma’s house was very important for me,” he tells me. “This is a memory that we put into the restaurant. At Andō, If you’d like more rice, for example, we give you more. It’s a very genuine type of hospitality, not from culinary or hospitality school. People expect us to charge them for the additional rice or the double portion, but, of course, we don’t.”

INFLUENCERS: A Special Exhibition Celebrating the Best of European and Southeast Asian Artists