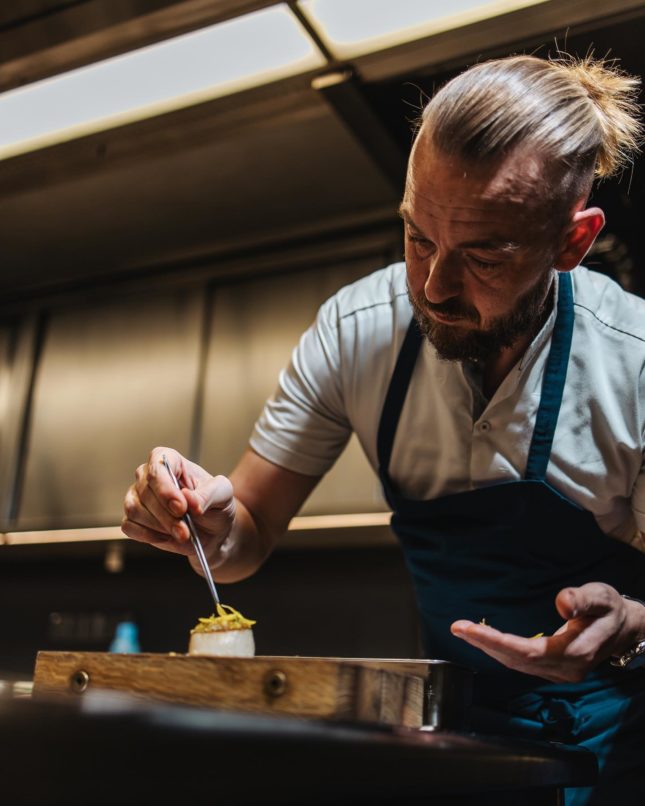 London needs no introduction. It’s one of the centres of the world, and the city’s cosmopolitan mix of people and cultures have made its restaurants a global culinary destination.

The English capital, however, is massive, which is why we turned to chef Tristin Farmer for recommendations on where to eat. The Scottish native spent over ten years there cooking at restaurants by Gordon Ramsay and Jason Atherton before arriving here in 2018 to helm the three Michelin-starred Zen.

From fine dining temples to British pub food, with detours to a cutting edge restaurant in Nottingham and a forward-thinking eatery in Scotland, here are Farmer’s tips on where to eat in London.

“I’m original from the central east coast of Scotland, north of Edinburgh from a town called Kinross. It’s not a big town but there used to be a really big music festival called T in the Park. It was the only thing that happened there. I had two jobs in Scotland, then I moved to London when I was 21.”

“I lived in London for ten years, and the city is as much home as Scotland is for me. It’s one of the top dining cities across the world. I’m on the VTL flight back to London – I haven’t been home in almost two years – and I have four restaurants lined up.”

“I’m going to Davies and Brook, which is Daniel Humm’s restaurant in Claridge’s. I’m excited to see the space because I used to work for Gordon Ramsay in Claridge’s about 12 years ago. I’m also going to Core by Clare Smyth. It’s a three Michelin-starred restaurant and I used to work with Clare back in my Gordon Ramsay days. I’m excited to see what she’s doing.”

“Then I’m going to Pollen Street Social, which is Jason Atherton’s restaurant. I used to work for Jason, and Pollen is excellent. I’m also going up to Nottingham as well, which is two hours away by train from London, to Restaurant Sat Bains. I have never been there, but it has two stars and very progressive tasting menus. It’s in the countryside and they have rooms you can stay in.”

“For someone new to London, they should go check out a British pub. I used to live in Notting Hill, and we would go to the local pub called The Prince Bonaparte. It’s a modern gastropub that serves British roast and Yorkshire pudding, which is very traditional but still eaten every Sunday in the UK. ”

“London also has a lot of really cool restaurants. There’s a burger bar called Meat Liquor, which started in a carpark with picnic tables. There’s a restaurant called Flat Iron, it only does one cut of steak. There’s an amazing tapas restaurant called Barrafina. If you want modern European fine dining, go to Restaurant Gordon Ramsay, which has been three stars for about 20 years.”

“You would definitely want to go to Soho. It’s the hippie part of London, and there are some quirky cocktail bars there. Go to The Ritz for afternoon tea. They have a dress code – men have to wear a suit jacket – and it’s extremely British. You can go to the theatre district for the Savoy Grill for a very traditional beef Wellington and peche melba, which was invented there for an opera singer, then go for a West End show.”

“Scotland is more about the beautiful countryside. There are so many historic places, quaint little villages and restaurants, but it’s a very different dining scene. Cooking at home is more a thing. Rather than eat out as a family, you cook as a family.”

“I’m going to be cooking barbecue when I’m up there, but I’m also going to see my chef friend who’s got an amazing, beautiful restaurant called The Cellar in the fishing town of Anstruther. It’s modern British fine dining that uses the best Scottish produce. He forages on the beach, and gets the fish from the local harbour, which is like a 30-second walk from the restaurant.”

“The produce in Scotland is some of the best in the world. In the countryside, a lot of people grow their own vegetables. There were always eggs from the neighbour, milk from the farm, vegetables from Grandma’s house. We also eat a lot of seasonal foods. You would get asparagus and strawberries in summer, in the winter time you get shellfish, lobster, razor clams, and game. It’s something you learn to appreciate.”

The post All the best places to eat in London, according to Zen’s chef Tristin Farmer appeared first on Prestige Online – Singapore.