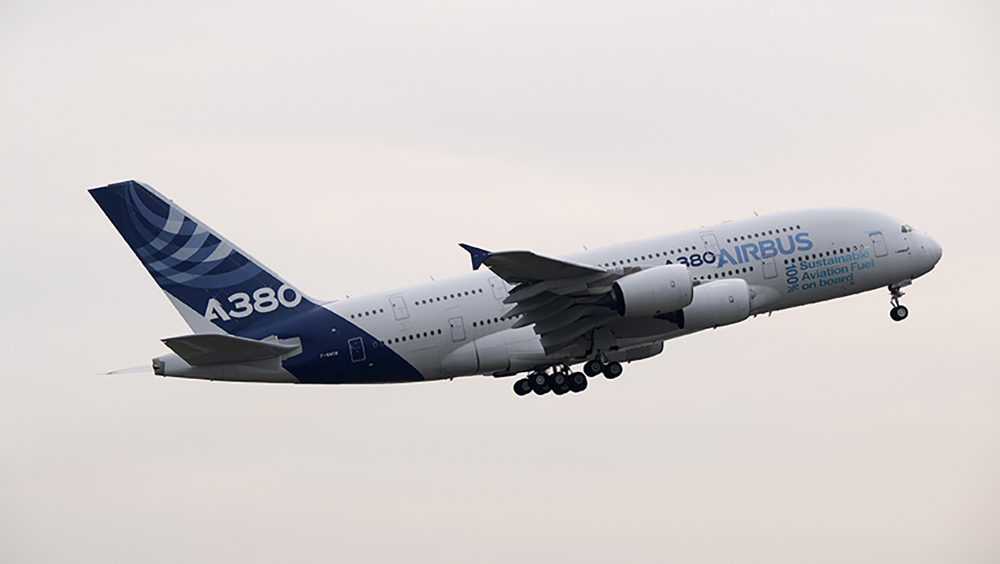 Airbus continues to soar full-speed ahead toward a greener future.

The aviation giant announced Monday that the first A380 to be powered by 100 percent Sustainable Aviation Fuel (SAF) successfully completed a test flight in France.

The gigantic test aircraft, known as MSN 1, took off from Toulouse-Blagnac Airport in Southern France last Friday, March 25, before safely landing around three hours later. During the flight, the A380 was powered by one Rolls-Royce Trent 900 engine running solely on unblended SAF.

Airbus says French energy company TotalEnergies provided around 29 tons of the sustainable bio-fuel for the flight. The SAF, which is made in Normandy, comprises a mix of waste materials, including used cooking oil and other fats. As such, it results in 90 percent less particulate matter (that white stuff you see in the sky) and reduces carbon dioxide emissions by up to 80 percent.

The final Airbus A380 was delivered to Emirates last December.  Airbus

This is the third Airbus aircraft model to hit the skies on 100 percent SAF in the past 12 months, following an A350 in March 2021 and an A319neo in October 2021. Airbus also plans to run a second flight with the same A380 on March 29 to test the use of the bio-fuel during take-off and landing.

Currently, the entire Airbus fleet is certified to fly with up to a 50 percent blend of SAF mixed with kerosene. The company’s aim is to achieve certification of 100 percent SAF by the end of this decade to help meet the industry’s goal of net-zero carbon emissions by 2050.

The experts agree that the bio-fuel will be a big help, too. The recent Waypoint 2050 report predicts SAF could contribute between 53 percent and 71 percent of the required carbon reductions. Airlines such as Gulfstream, Boeing and United have also embraced SAF and carried out successful flights using the bio-fuel.

The A380, which made its debut back in 2007, is actually no longer in production as of last year, but it’s clear the double-decker superjumbo jet still has a role to play. In fact, this particular A380, which has a special engine installed at the back, will act as a testbed for new hydrogen technologies and reportedly help Airbus bring a zero-emission aircraft to market by 2035.