8 tourbillon watches we loved in 2020

Solidifying its status as a totem of haute horlogerie, the tourbillon proves its worth once more in these eight marvels. Unveiled during the Watch Art Grand Exhibition Singapore 2019, the maiden Ref. 5303R Minute Repeater Tourbillon intended for Southeast Asia featured a dial-side striking mechanism – a first for Patek Philippe. This year’s follow-up, the 42mm Ref. 5303R-001, undergoes a slight modification with more emphasis placed on its aesthetics. Thanks to an openworked architecture, this attention-grabbing variant sports an unusual tourbillon placement.  With only the back of the tourbillon cage visible underneath the transparent seconds sub-dial at 6 o’clock, the rationale of displaying this mechanism on the caseback is to prevent UV rays from straining the lubricants that keep the tourbillon running smoothly. Encased in 18k rose gold inlaid with 18k white gold, the timepiece is driven by the manually wound Calibre R TO 27 PS. The first automatic tourbillon watch for women by Vacheron Constantin is resplendently designed through the prism of elegance. Measuring 39mm, the case of the Traditionnelle Tourbillon is made of 18k pink gold and further illuminated with 208 brilliant-cut diamonds set on the bezel, caseband and lugs. Punctuating the splendid iridescent mother- of-pearl dial is the diamond-fringed tourbillon, which is a stunning interpretation of the manufacture’s symbol, the Maltese cross. To attain the desired exacting standards, the bar of the openworked tourbillon carriage is hand-bevelled in a process that takes 11 hours. The exquisitely finished watch is driven by the latest in-house tourbillon movement, the slim calibre 2160/1 with a power reserve of 80 hours. Not unlike the Freak X, Skeleton X and Diver X, the Blast tourbillon trumpets the “X” leitmotif Ulysse Nardin has orchestrated for its recent novelties. The geometric shape-within-shape mise en scène bears bridges reinforced with the “X” motif. The watch is offered in four variants. The White Blast (pictured here) is particularly eye-catching with a palette inspired by the unsullied beauty of Antarctica. Achieved through a combination of white ceramic and titanium, the 45mm case houses the new UN-172 automatic movement, equipped with a platinum micro-rotor and a tourbillon featuring a silicon escapement and hairspring for magnetic resistance. There is also the ultra-exclusive 211-diamond encrusted Sparkling Blast limited edition for your consideration. Contrary to a classic tourbillon, which customarily completes a single rotation in 60 seconds, the in-house designed and manufactured Vanguard Revolution 3 Skeleton features a triple-axis tourbillon. Observing three cycles in one hour, eight minutes and 60 seconds on its respective three carriages, Franck Muller further eases its interpretation by incorporating two retrograde hands flanking the tourbillon to track its progression. The signature tonneau case, measuring 46mm by 55.9mm, is made of black PVD- treated grade 2 titanium. It is sandwiched by a sapphire dome on the front and back of the watch, employed especially to highlight the triple-axis tourbillon. Boasting 10 days of power reserve, the manually wound movement is impressively skeletonised and partially finished in red anodisation, accentuating an avant-garde persona. 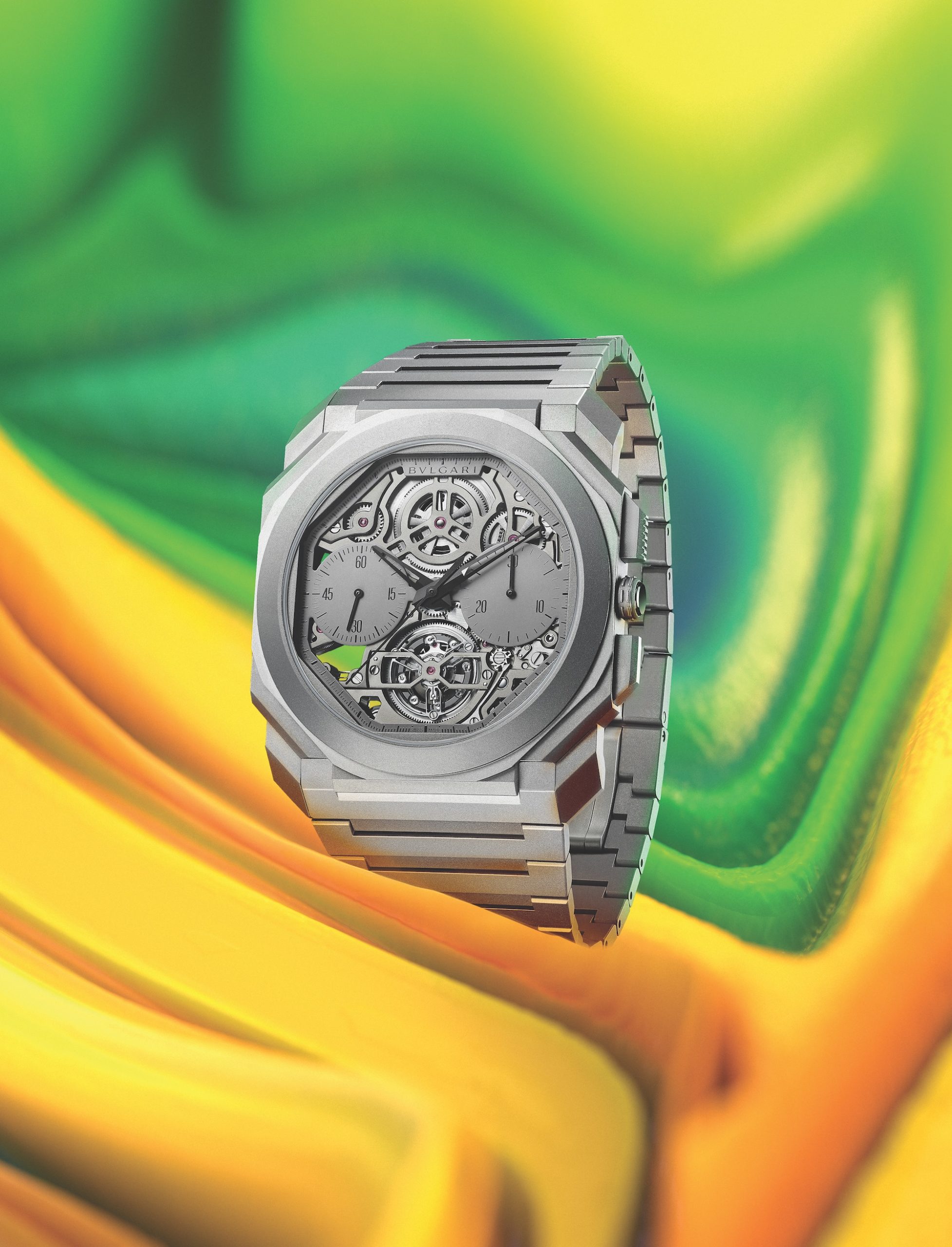 The slimmest tourbillon chronograph watch ever made with a record-setting thickness of just 7.4mm, the Octo Finissimo Tourbillon Chronograph Skeleton Automatic is the sixth and latest Bvlgari timepiece to write itself into horology history books. Packing single-push chronograph and tourbillon complications, the maison circumvents any obligation to incorporate an oscillating weight to replenish the 52-hour power reserve with a peripheral rotor, which also keeps the new movement, BVL 388, staggeringly svelte. Although it is a monopusher chronograph, the second pusher at 4 o’clock alternates between the functions of the crown: hand winding and time setting. This 42mm sandblasted grade 5 titanium marvel, coupled witha matching bracelet, is produced in a limited-edition run of 50 pieces. Echoing the futuristic vibe of concept cars, the Mille Miglia Lab One celebrates the future of watchmaking with daring and sheer bravado, as evident in the prodigious 48.6mm by 46mm angular cushion-shaped, bead-blasted titanium case in black DLC. While the Mille Miglia collection pays tribute to the 1000 Miglia vintage car rally, this limited-edition concept watch (available in 20 pieces) is more closely aligned with the similarly outlandish L.U.C Engine One in its avant-garde approach to haute horlogerie. Underneath the bonnet of the engine-inspired, partially openworked dial, the calibre Chopard 04.03-M is equipped with a stop-tourbillon mechanism – a function much like the hacking seconds, only inherently more complex and rarely encountered. The marque’s first chronometer-grade, non-round automatic tourbillon movement imparts 60 hours of power reserve. Just as impressive is the patented invisible crown. Concealed at 9 o’clock, it is sculpted to resemble the wheel of a sports car. 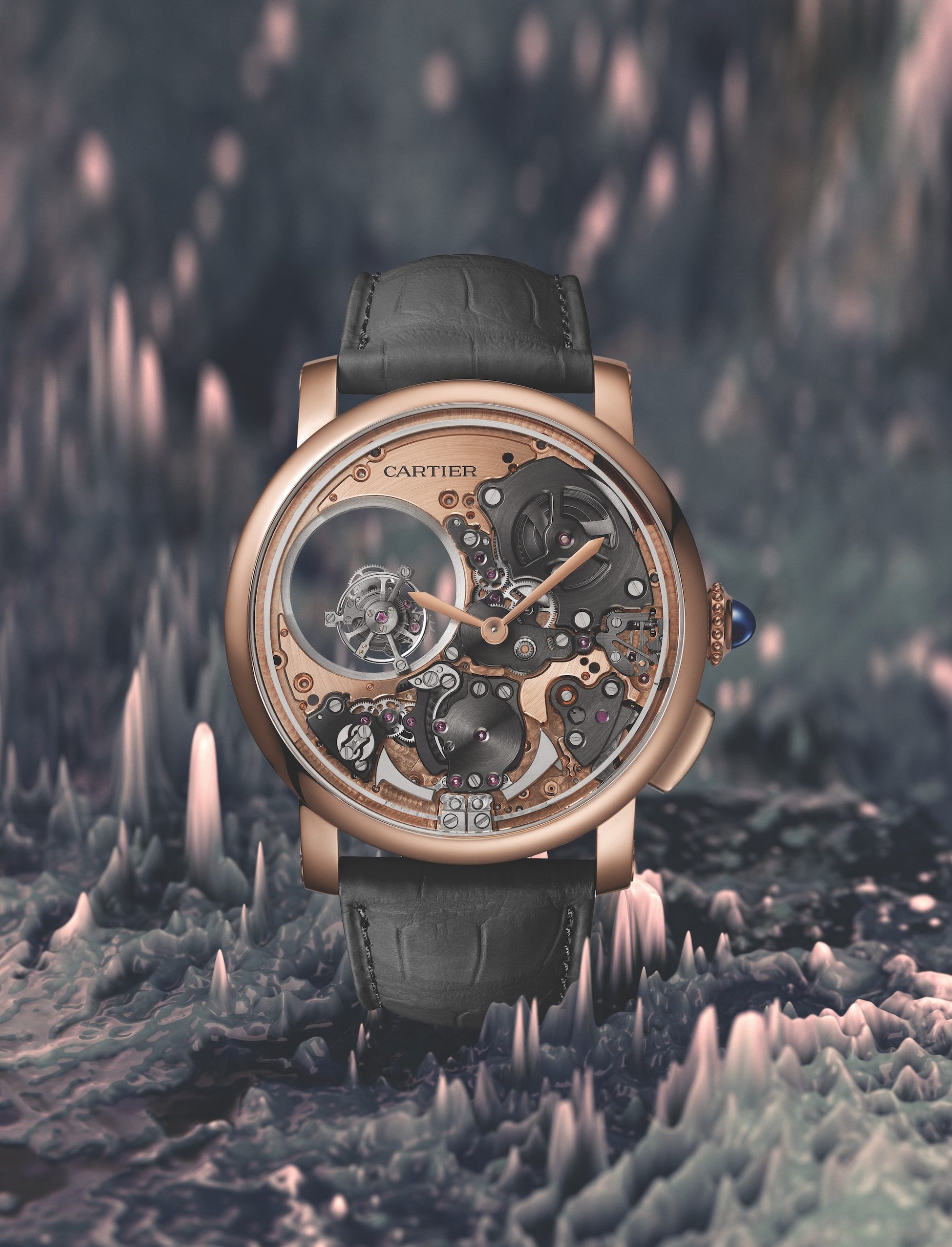 The visually mesmerising Rotonde de Cartier Minute Repeater Mysterious Double Tourbillon draws inspiration from Cartier’s very own mystery clocks that date back to 1912. Seemingly decoupled from the movement, a feat that only deepens the timepiece’s mystique, the secret to this “floating” one- minute flying tourbillon lies in the rotating sapphire disc, which holds the complication in place and completes one revolution every five minutes. In addition, the minute repeater’s hammers and gongs occupy the periphery of the openworked movement. Debuted in the lead-up to SIHH 2017 in titanium and platinum, this year’s 45mm variant is swathed in 18k pink gold in a numbered limited edition of 20 pieces. The remarkable watch is powered by the manufacture’s manual-winding calibre 9507 MC with an 85-hour power reserve.

The post 8 tourbillon watches we loved in 2020 appeared first on Prestige Online – Singapore.

Romantic comedies on Netflix for a cosy night in