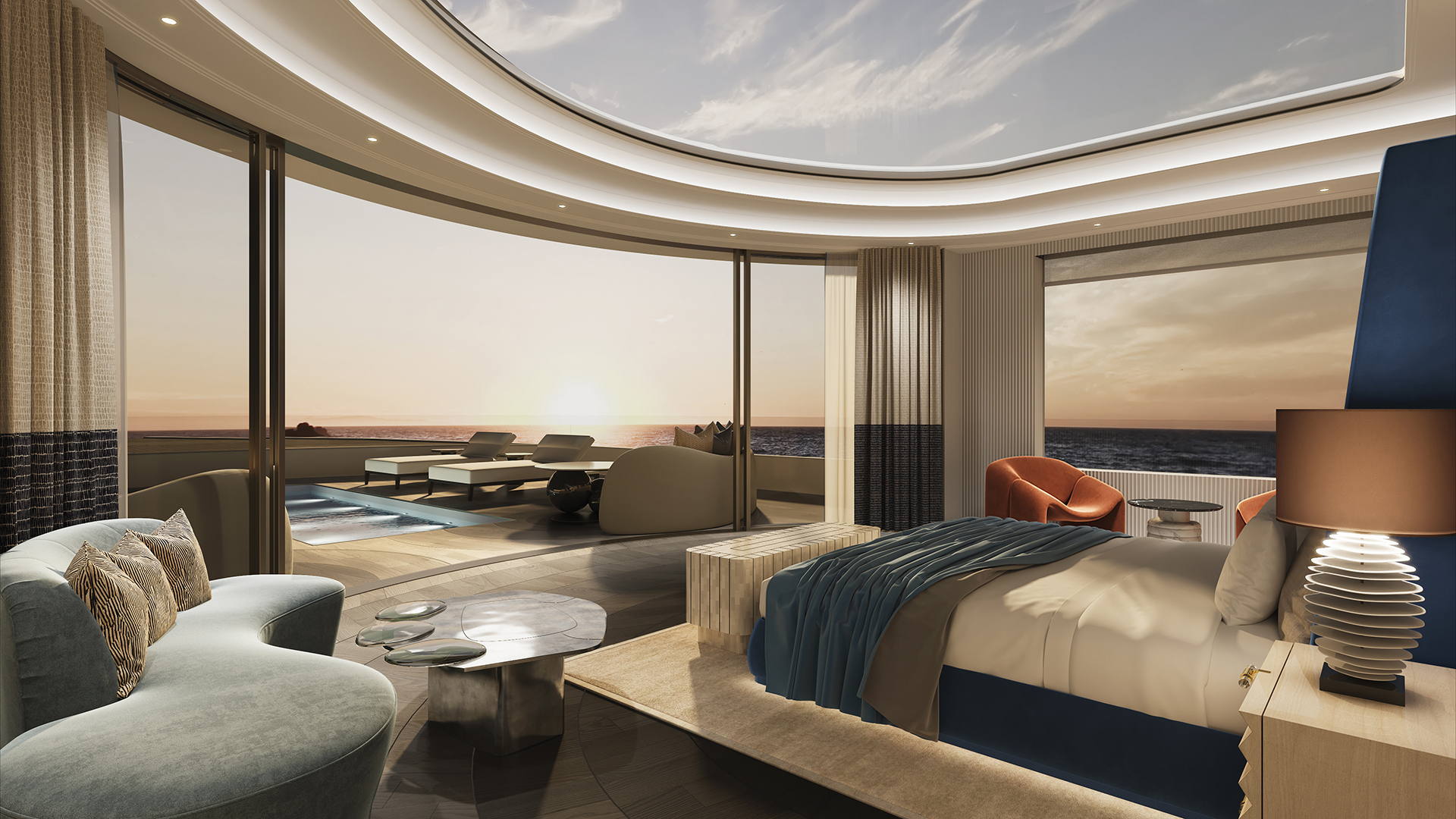 Celebrated architects and decorators known for shore-side projects are increasingly taking to the water, where they’re proving they’re anything but “at sea.” Armed with high-profile yacht commissions, these designers are throwing the cookie-cutter layouts and tired aesthetic tropes of typical marine interiors overboard. Instead, they’re employing floorplans that flow more gracefully, luxe furnishings and blue-chip art that would feel at home in the most sophisticated urban pied-à-terre.

The force of this shift could be felt at September’s Monaco Boat Show, where new designers brought an outsider’s eye to the industry. One especially envelope-pushing case in point: Oceanco recently began an initiative to reimagine the super yacht from top to bottom, tapping forward-thinking Dutch interiors studio Tank as well as former Rolls-Royce design lead Giles Taylor to make it happen. While we wait to see, and sail on, what they’ll create, we’ve gathered an elite crew of star decorators, many brand-new to the life aquatic, whose genre-changing work is on the water right now.

This studio launched its superyacht arm, Njord, in 2020 to meet the needs of residential clients spending more time on the water during the pandemic. “They loved their yachts for a week or two, but the boats didn’t feel like home when you lived on them for months,” says cofounder and creative director Marie Soliman-Berglund, whose team set out to give the vessels that special ambience. Apart from adding decadent details such as decks from French flooring purveyor Oscar Ono and cutting-edge air-filtration technology, Njord created taller rooms, or the illusion thereof. The main saloon on the 249-foot Eden features a metallic fabric overhead and an opening to the floor above. Combined, the interventions give the space a “sense of height and elegance” that’s tricky to achieve in a ship’s tight quarters.

Italian yard Sanlorenzo recently built upon its award-winning aesthetic credentials by enlisting Spanish-born Urquiola for an ongoing collaboration. Featuring a travertine-encased central staircase of bronzed steel and oak and pieces from Urquiola’s own furniture collections, SD96 puts a refreshing focus on flowing spaces and open views. “I like working on projects where the client asks you to do something you’ve never done before,” says Urquiola, who notes that being “a beginner in the industry helped me propose my personal way of experiencing the boat, making sure that the usual comfort of a home is replicated in a smaller space.”

Mikic, a former fashion designer, actually made his interiors debut at sea, crafting elements for London property developers the Candy brothers’ yacht in 2006, which led Elisabeth Murdoch to commission Mikic to decorate her entire 159-foot Elisabeth F. two years later. “I designed it in a way that was like an apartment,” he recalls of the vessel, which won awards at both the Monaco and Antigua boat shows. “I had almost no built-in furniture, which is crazy.” Today he continues to buck marine norms. Combining classic elegance with playful colors, patterns and textures, he gave a 109.5-foot yacht a bachelor-pad feel, and he’s now putting sheepskin-clad Fritz Hansen chairs and tufted boucle sofas on a 195-foot sailing yacht alongside contemporary British artworks by the likes of Bridget Riley.

The deck aboard a vessel by Foley & Cox.  Xavier Lamadrid

Founding principal Michael Cox and design director Zunilda Madera bring an acute appreciation of luxe details to yacht interiors (thanks in no small part to the decade Cox spent with Ralph Lauren’s home brands). For the 152.5-foot vessel of a client whose homes in Monaco and Austria they decorated, the duo combined custom furniture from DeAngelis—including plush upholstered sofas with a depth and a softness that defy at-sea expectations—with finds from the Paris Flea Market. These idiosyncratic pieces, they say, bring a collected, eclectic patina to the yacht, reflecting the client’s personality.

The deck aboard Halekai by Ken Fulk.  Courtesy of Ken Fulk

A consummate showman, Fulk just completed his first yacht interior, a wooden sailing vessel for longtime clients. It combines historic inspiration with whimsical contemporary twists. The ship’s name, Halekai, means “home on the sea” in Hawaiian, which points to the state of mind of both clients and design team. With Honolulu’s Iolani Palace as a jumping-off point, Fulk combined the European and the indigenous, creating such evocative details as carved teak doors and custom marquetry in teak and koa wood and embroidered headboards based on a royal Hawaiian wedding quilt.

Known for designing hotels and restaurants from Chicago to Osaka, Bernerd first brought her signature industrial élan and masculine edge to the sea nearly a decade ago. “Yacht interiors so often veer towards the traditional,” she says. “We’ve sought to bring a fresh, contemporary, sporty feel with pale washed woods and beautiful linens mixed with textured fabrics.” On a just-completed 102-foot Sanlorenzo yacht, marble insets adorn built-in cupboards while panels of green onyx clad a bathroom’s walls and the front of the glam below-deck bar.