Estimated to be as old as 4,500 years, The Great Sphinx is one of the only surviving Seven Wonders of the Ancient World. It’s located in the Giza plateau, on the west bank of the River Nile, around a half-hour drive west of Cairo. At 240 ft (73 m) high and 240 ft (73 m) long, it’s the largest surviving statue from the ancient world. For years, Egyptian rulers worshiped this mysterious sphinx as a powerful form of sun god. Looking to learn more? We’ll wager you haven’t heard some of these interesting facts about The Great Sphinx of Egypt.

Interesting Facts about The Great Sphinx

1. It’s based on a mythological creature

A sphinx is a mythological creature with the body of a lion and the head of a human, prominent in Egyptian, Asian and Greek mythology. In Egypt, the sphinx was often depicted as a male with a Pharoah headdress. Unlike the Ancient Egyptian sphinx, the Asian and Greek sphinx has eagle wings and is usually female.

The Ancient Egyptians never actually referred to the statue as “The Great Sphinx”. Texts from around 1400 BCE refer to it as “a statue of Khepi”. For years after this, The Great Sphinx remained buried under sand. Later,  Thutmose IV unknowingly fell asleep on top of it and dreamt that a god called Horem-Akhet Khepri-Re-Atum told him to free the Sphinx from beneath the sand and he would become ruler. After this, the sphinx became “Horem-Akhet”. The next mention of it is during the Medieval period, when it’s referred to as “balhib” and “bilhaw.” 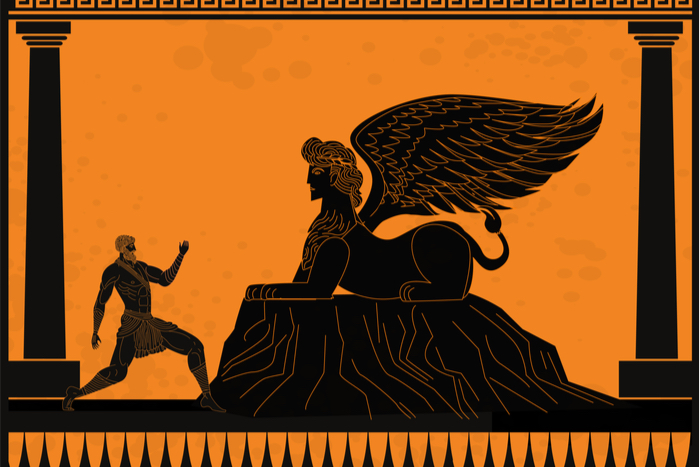 2. We still don’t know who built it

It’s puzzled historians and archaeologists for centuries. The most widely accepted theory is that it was built during the reign of Khafre since the head of the lion resembles Khafre’s face. This would place the statue’s birth around 2500 BCE. This is also the same Pharoah that built the Pyramid of Khafre, the second-largest monument in the Giza Necropolis. However, some scholars have claimed it was created by Djedefre, who tried to usurp the throne after the death of King Khufu, creator of the pyramid. 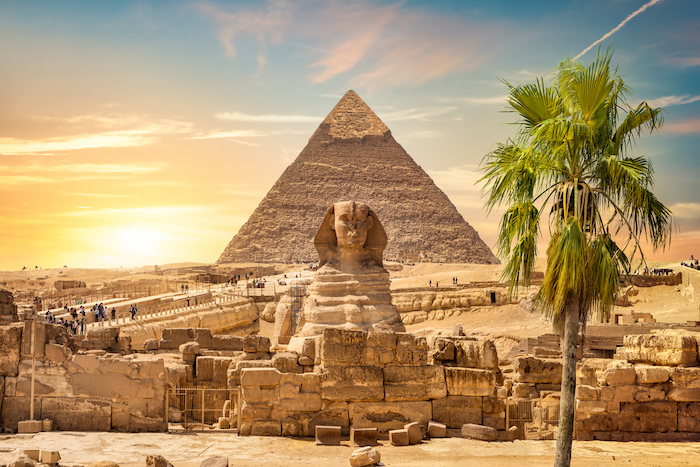 3. It was once quite colourful

It hasn’t always been the delightful tan colour it is today. In fact, it’s thought that once upon a time The Great Sphinx would have been painted a primary palate, in comic book red, blue and yellow. The face was probably a russet red and the headdress was very likely canary yellow.You can still see the residual red paint on one of the Sphinx’s ear. 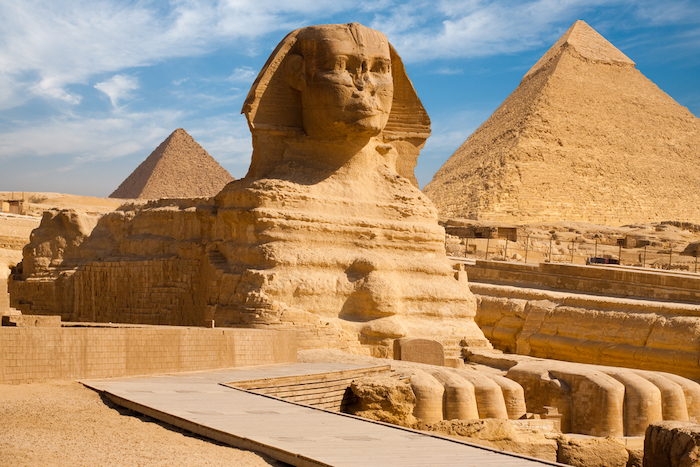 4. And it was carved from one enormous piece of stone

It would be fair to assume that the Sphinx, as tall and wide as it is, would’ve been assembled piece by piece. In fact, it was carved from one single piece of limestone leftover in the quarry used to build the pyramids. The front paws were built from separate blocks of limestone too.

Egyptologist Mark Lehner estimates it took around 100 workers approximately three years to finish the monument, using chisels and hammers. Researchers also found toolkits abandoned near the worksite and large stone blocks that hadn’t been processed, indicating that it was actually meant to be larger than it is today. Incredibly, some leftover lunches – cattle, sheep and goat meat – also prove the workers left in a hurry. 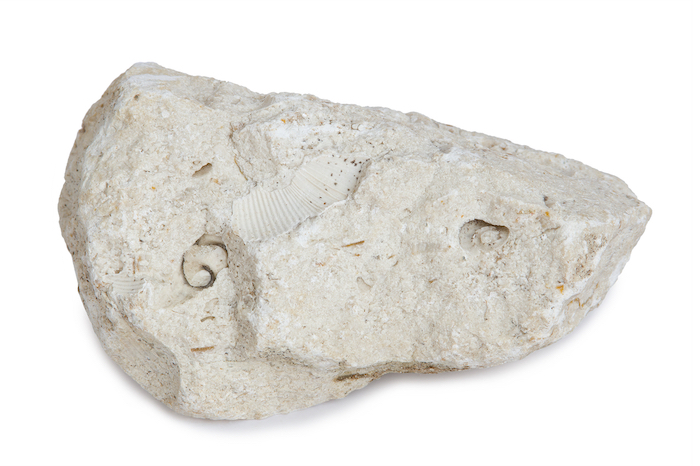 5. Napoleon has nothing to do with his nose

One of the Sphinx most distinguishing features, beyond its size and spectacle, is his lack of a nose. At one stage, the elegant face would’ve sported a one-metre long nose. A long pervading myth told that Napoleon’s troops shot it off with a canon when they invaded Egypt in 1798. This has now been discredited thanks to a series of 18th-century drawings which suggest he had been without a nose for quite some time. It’s likely that the nose was cleaved off around 300 years before, potentially by a Sufi Muslim during a protest. The Great Sphinx also once sported a fetching beard but he lost most of it to erosion. You can see a remnant from the beard at the British Museum, in the Museum of Egyptian Antiquities in Cairo.

Some theorists, including French archaeologist Dobrev, maintain that the beard was actually a later amendment – The Britsh Museum agrees with this hypothesis too. Apparently, the chine would have suffered significantly more damage if it had been built at the same time. Some propose it was added as part of Thutmose IV”s great restoration project. 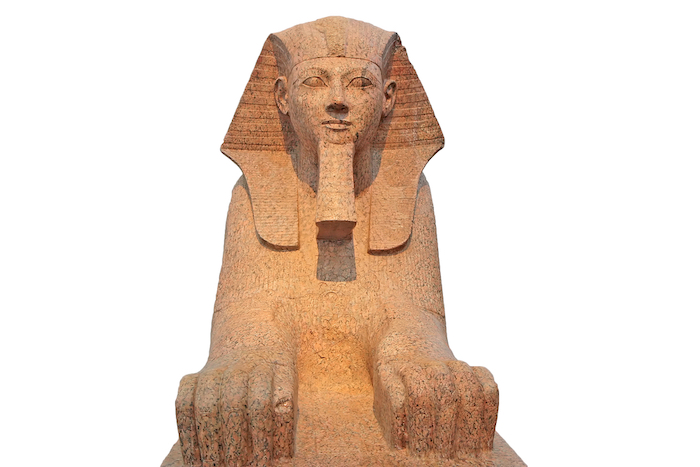 7. He may not have always had a small head

One of the most peculiar aspects of The Great Sphinx is its out-of-proportion head. Some research supports the theory that the sphinx has actually been recarved several times by different pharaohs since it was first created, to keep up with fashionable aesthetics. Some even claim the original head might have been a ram or a hawk. This could support the theory that The Great Sphinx is a lot older than we think it is. 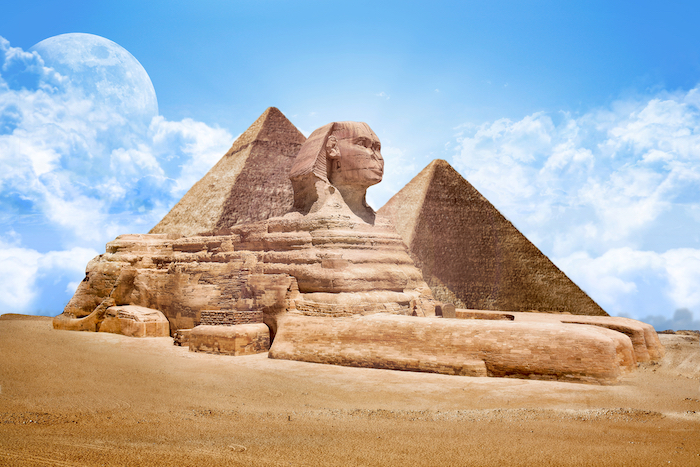