We may not be able to travel to France any time soon, but we can always bring a bit of French culinary to our palate.

Salmon with sorrel cream sauce is one of the most famous historic dishes from the legendary Troisgros restaurant in France, whose cofounding chef Pierre Troisgros passed away last September. First created in 1963 in Roanne, France at the eatery, the iconic French dish is once more getting attention due to the sad news. There are many recipes out there that pay tribute to the chef and his classic dish but if you decide to try to make it at home, there are a few things to keep in mind such as flattening the salmon and adding vermouth to the sauce. 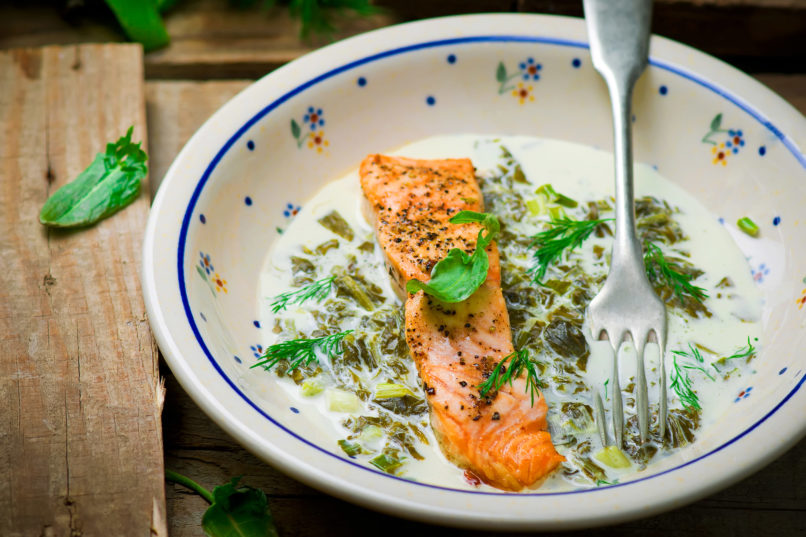 1. Choosing and preparing the salmon fillets

The traditional recipe uses neither salmon steak nor a loin, but rather salmon fillets. They are treated like cutlets by splitting the fillets in half and flattening them between two sheets of baking paper with a rolling pin. The Troisgros recipe requires the fish to be previously flattened, so don’t skip this step.

It is not only the ingredients that have contributed to the legend of salmon with sorrel, but also how it’s served. It is meant to be eaten in a large shallow bowl-like plate capable of holding the fish very comfortably. Also, the cream must largely cover the bottom before the salmon is placed on it; the salmon must finish its cooking there in the cream which is still hot. Legend has it that the Troisgros family imagined a very wide plate with a diameter of 32 cm to hold the salmon. As for the cream, it is best to use a double cream, with at least 30% fat content. Otherwise, use thick cream

3. Don’t forget to add vermouth to the sauce

Even the version of Pierre Troisgros’s son, Michel, holder of the establishment’s three Michelin stars, includes vermouth (in fact the recipe is no longer on the menu, but can be ordered by special request). This shows the importance of this alcohol in the preparation of the sauce, although just 40 ml are needed. The fish stock is reduced with a chopped shallot, white wine and vermouth. The cream is only poured in during the second stage while the sorrel leaves are thrown in at the last stage.