From supermarkets to Michelin-starred restaurants, sushi is a stalwart for many diners. The next time you’re hungry for this quintessentially Japanese dish, consider these 11 restaurants that serve the best sushi in Singapore.

Much of the sushi we know today is a style called Edomae that originated between 1603 to 1867. Back then, Tokyo was known as Edo, and fish such as tuna, bonito, halibut, and shellfish were harvested from Tokyo Bay, or Edo-mae.

Due to the lack of refrigeration, chefs preserved the catch through various methods such as curing, marinating, and pickling with ingredients like soy sauce and vinegar. The fish was then layered on top of hand-shaped rice mounds called nigirizushi.

In Singapore, Edomae nigiri sushi is can be both affordable and atmospheric. You can find cheaper options from convenience stores, but be prepared to pay for the highest quality fish combined with top notch techniques.

Many higher end restaurants also serve them omakase style. This means the chef decides what you eat, a choice primarily based on seasonality and whatever is freshest.

Read on for the best sushi restaurants in Singapore: 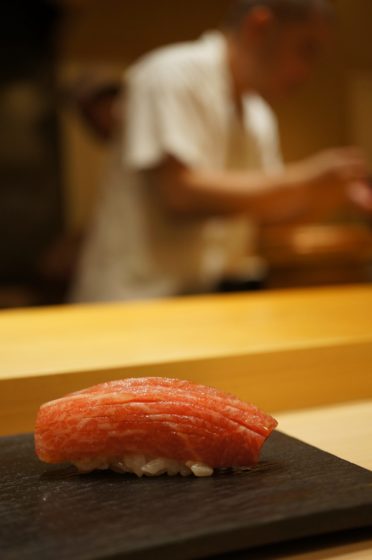 Ashino is the namesake restaurant of chef Taku Ashino. He trained as a sushi chef in Tokyo for more than a decade and was the head chef at Hide Yamamoto at Marina Bay Sands in 2013 before opening his own restaurant in 2015.

Ashino gets his fish from a supplier at the Toyosu Fish Market who kills the fish humanely, a practice called shinkei jime. The fish is then served with a rice blend cooked with water from Mount Fuji. 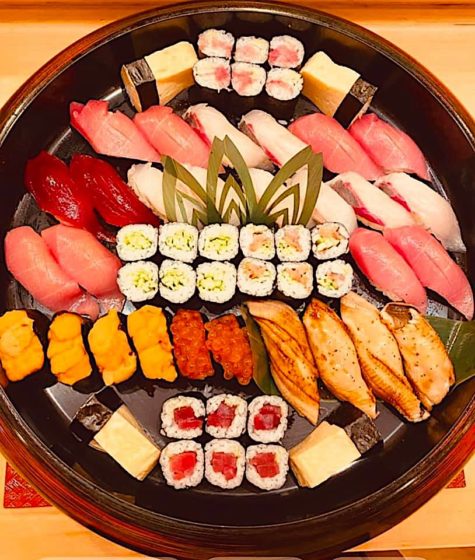 Shiraishi is a restaurant named after chef Shiraishi Shinji. They focus solely on Edo-style sushi through sets (starting from $50+) that includes soup and dessert.

Other dishes include bento boxes, sashimi serves, and kaiseki courses. There is also the Edomae sushi set (S$180+) or the seasonally priced omakase menu. 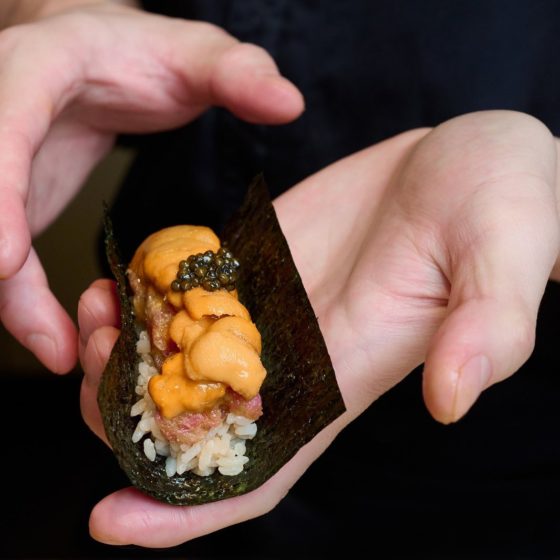 Shinsora is a ten-seater, omakase-only restaurant based around Edo style sushi. The eatery is run by chefs Sky Tai and Leon Yap, both who picked up awards such as World Sushi Cup Champion.

They have two omakase menus (starting at S$180+), which offers appetisers, sashimi, sushi, a cooked dish, chirashi, soup, and dessert. You can also add on the chefs’ award-winning sushi creations.

If you prefer to have the experience at home, Shinsora currently offers two omakase delivery sets designed to recall the bento boxes served on Japanese trains.

Shinsora is open from 7pm on Tuesdays to Sundays. 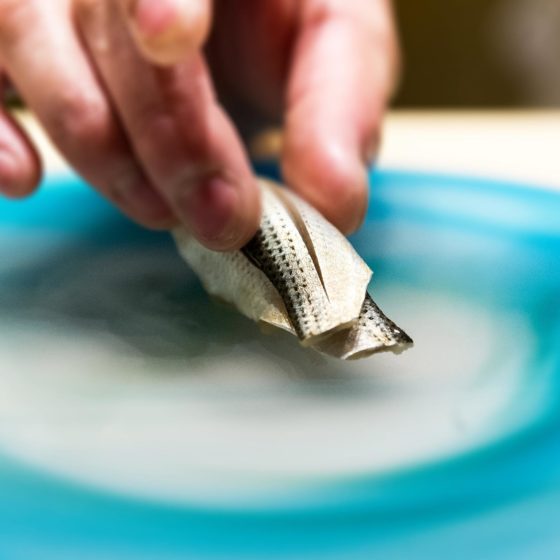 Chiharu is the sushi counter at izakaya restaurant Tamaya. Run by three Japanese chefs, they offer an omakase menu (S$140+) that includes appetisers, sashimi, sushi, seasonal dishes, soup, and dessert. There is also a sushi and sashimi course for $120+ or just sushi for $90+. You can also order individual dishes.

Chiharu is open from 5pm to 10.30pm from Mondays to Sundays. Reservations are required for dining between 6pm to 9pm. Call after 3.30pm to book. 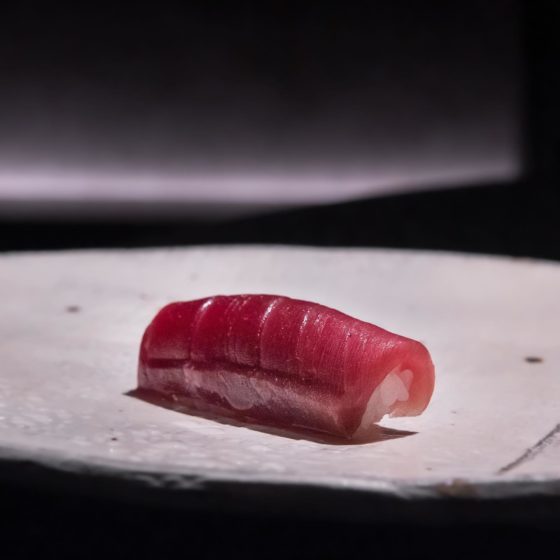 Sushi Kou is helmed by chef Yoshio Sakuta, formerly of the two-Michelin starred Shoukouwa. All the fish is flown directly from Toyosu market, which are presented in two omakase menus.

The Aya menu (S$420+) gets you items including steamed egg with hairy crab, wild caught ocean eel, and 11 pieces of sushi. The Kou set (S$500+) adds on dishes like abalone and water shield, a type of aquatic plant they serve with vinegar sauce. 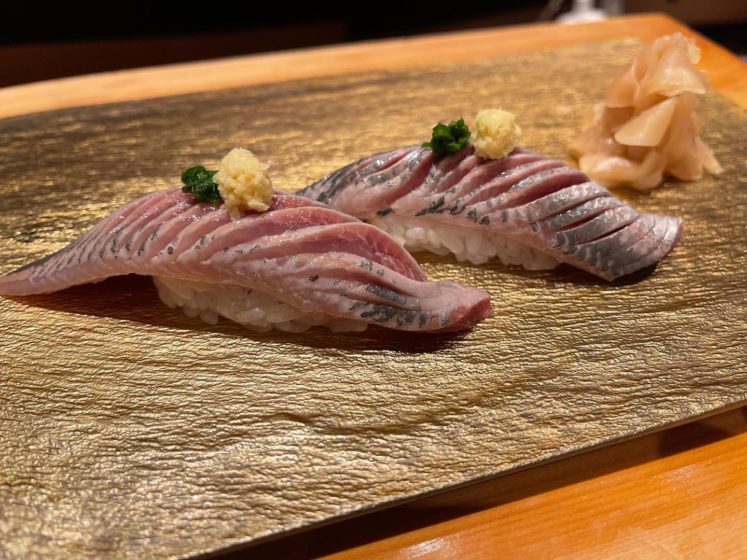 Koji Koike, chef at Sushi Koike, comes from a line of sushi masters. His grandfather and father were both in the trade, and Koike grew up at the Tuskiji Fish Market in Tokyo since he was six years old.

The restaurant only offers sets for lunch and dinner. You can get a fixed assortment of sashimi and sushi, or choose the seasonal option. For omakase, there are three tiers between S$168+ to S$288+ for lunch and S$250+ to S$380+ for dinner.

Sushi Koike is open from 12pm to 3pm and 6.30pm to 11pm from Tuesdays to Saturdays. They only open for dinner on Mondays. 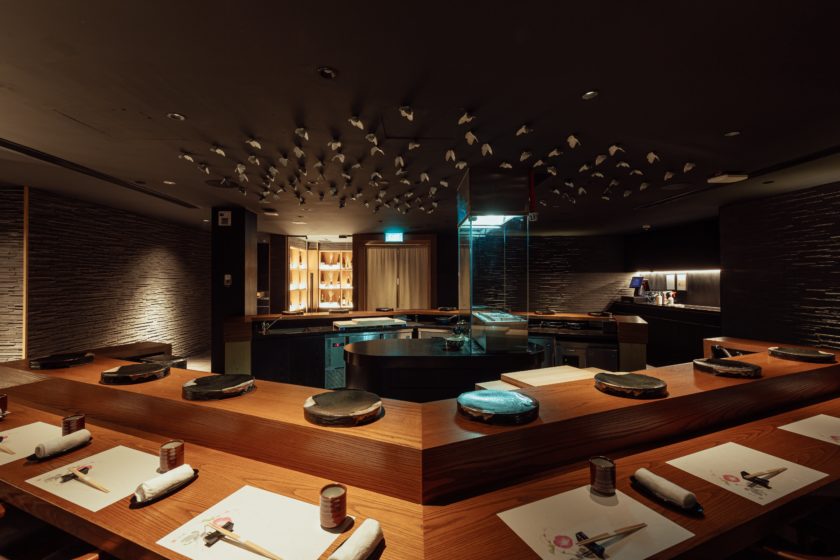 Sushi Ichizuke started as a pop up at Zouk’s Capital Kitchen before securing a permanent space there. It’s run by chef Ryoichi Nakatani, who has more than 30 years of experience including at a restaurant in the highly competitive Tsukiji Fish Market area.

There are three sets to choose from during lunch or dinner. The most affordable includes an appetiser, seven pieces of sushi, hand roll, soup, and dessert. Seasonal items appear as you navigate the higher priced menus. Sushi Ichizuke also offers a delivery omakase set for two starting at S$300+. 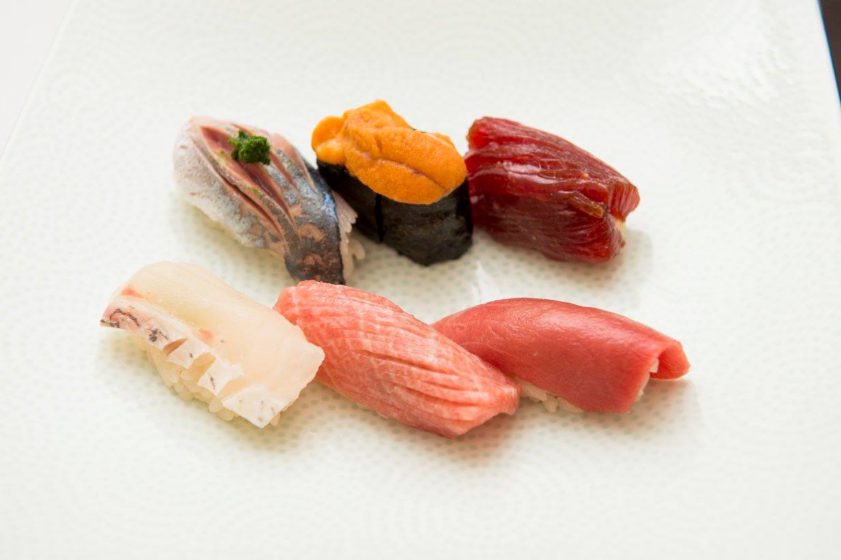 Shinji by Kanesaka is the Singapore outpost of chef Shinji Kanesaka, who also runs the two Michelin-starred restaurant Sushi Kanesaka in Tokyo. He opened his first eatery here in Carlton Hotel, followed by another at The St. Regis. Both currently hold one star.

As usual, it’s only set menus here. Omakase starts at S$250+ for lunch (S$300+ for dinner) and can climb to S$500+ in the evening. For an intimate taste of Edo-style sushi, go for the Sushi Edomae menu (S$220+), which comprises of 15 pieces plus soup and Japanese fruit.

The restaurant has two outposts, one in The St. Regis Singapore and the other in Carlton Hotel.

Shinji by Kanesaka is open from 12pm to 3pm and 6pm to 10.30pm from Mondays to Saturdays. 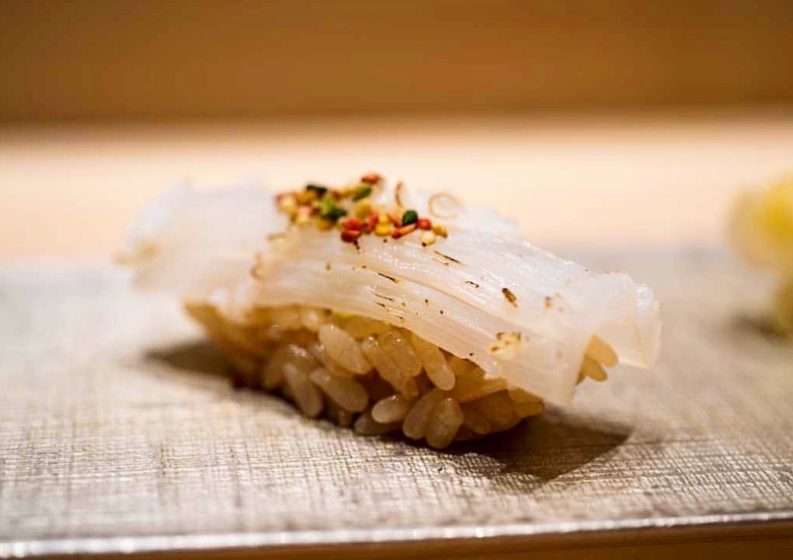 Sushi Kimura is a one Michelin starred restaurant by chef Tomoo Kimura. He apprenticed under a sushi master in Tokyo and was the executive chef at several fine dining and Michelin-starred sushi-yas before opening his own eatery.

At the restaurant, Kimura uses wild caught seafood together with organic ingredients such as Yamagata rice and vinegar from Kyoto. He also cooks with nori from the Ariake sea and Hokkaido spring water.

Choose between three sets for lunch starting at S$180+, which include sushi alongside yuba and ikura with dashi jelly and Hokkaido abalone. During dinner, Kimura only serves one set (S$400+) comprising of seasonal sashimi, grilled fish, and a platter of sushi covering uni, blue fin tuna, and seasonal clams.

Sushi Kimura is open from 12.3opm to 3pm and 7pm to 10pm from Mondays to Sundays. 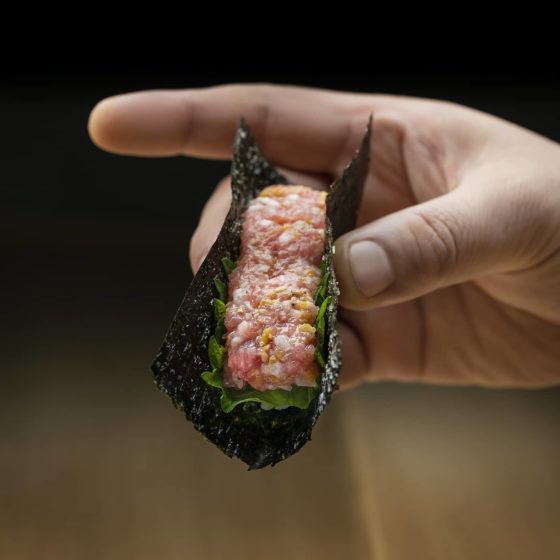 Shoukouwa is a hallowed, two Michelin-starred shrine to Edo-style sushi. They fly in their ingredients daily from Toyosu Fish Market and strive to serve the food with minimal cooking and manipulation. They’re also very delicate with their use of rice vinegar to allow subtle nuances to shine, and recommend you use a clean hand to consume the sushi within seconds of being served.

There are two sets during lunch. The Miyabi (S$320+) option is an introduction to Shoukouwa’s approach while the Hana (S$480+) showcases the best of Japan. Dinner is purely omakase, with two sets (S$480+ or S$650+) depending on how extravagant and hungry you feel. 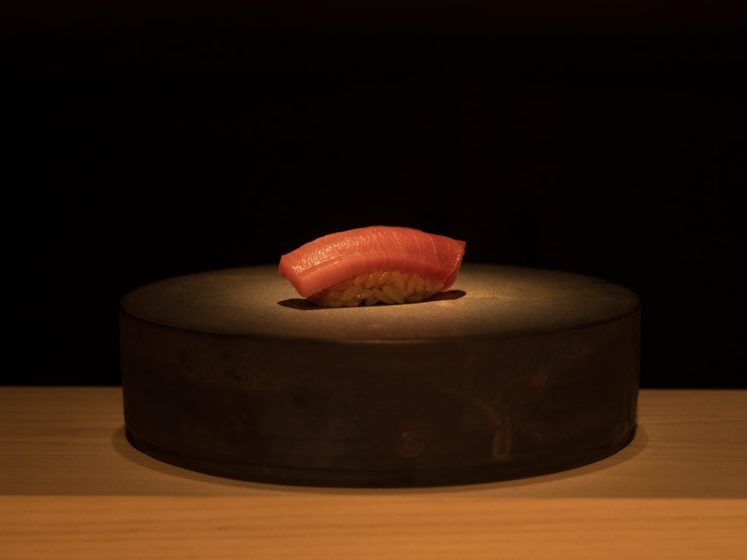 Oshino is by chef Koichiro Oshino, who held the position of head chef at Shinji by Kanesaka’s two locations for almost a decade. His current restaurant was awarded one Michelin star this year.

Oshino serves Edo-style sushi that’s based on washoku cuisine, which aims to capture the essence of nature and its changing seasons. You can sample this belief through their 15- or 20-pieces Sushi Edomae sets, which are offered during lunch and dinner (either S$180+ or S$350+). The omakase sets (S$300+ during lunch or S$500+ for dinner) immerse you completely in the tradition with appetisers, sashimi, cooked dishes, sushi, soup, and dessert.